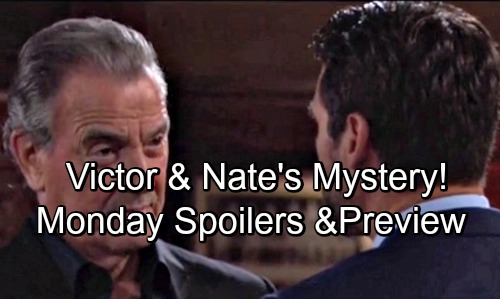 The Young and the Restless (Y&R) spoilers for Monday, August 6, tease that Victor (Eric Braeden) will run into a problem. He’ll realize he needs some help, so he’ll end up turning to Nate (Brooks Darnell). Y&R fans know that Victor’s the reason Nate came to Genoa City. He’s helping Victor out with his recovery, so perhaps this is about a medical issue.

It’s possible Victor will have another setback and seek Nate’s assistance. However, there’s a different option. Victor was miffed about Neil (Kristoff St. John) stealing business from Newman, so he cut ties with him professionally. If Victor decides he needs Neil’s advice after all, he might use Nate as a go-between.

Whatever the case, Nate will get stuck in Newman chaos. He may live to regret getting mixed up with Victor and his drama-filled family. In the meantime, Summer (Hunter King) will get tired of waiting. She’s been working hard to worm her way into Billy’s (Jason Thompson) bed, but she’d not seeing enough progress.

As a result, Summer will kick things up a notch. She’ll intensify her seduction efforts and hope that her plan pays off. The Young and the Restless spoilers say Billy will continue to resist, but for how long? Summer will lock lips with Billy before the week’s over, so she must be doing something right – or wrong depending on how you look at it!

Elsewhere, Sharon (Sharon Case) will take a stand against Nikki (Melody Thomas Scott). There are really only two possibilities here. Since the other cover-up crew members don’t seem to be involved, maybe we can rule that one out. That just leaves something to do with Nick (Joshua Morrow).

Nikki might want Sharon to talk some sense into her son. She may think it’s time for Nick and Victor to finally make peace. Sharon could argue that it’s not going to happen. She made amends with Nick and wants to support him, so she might insist on staying out of their war. If Victor and Nick want to try a truce eventually, that’ll be up to them.

Nevertheless, The Young and the Restless spoilers say Nikki won’t lose sight of her goal. She’ll do everything in her power to bring the family together, but she’s sure to hit plenty of snags. We’ll give you updates as other Y&R news comes in. Stay tuned to the CBS soap and don’t forget to check CDL often for the latest Young and the Restless spoilers, rumors, updates, and news.