BY Heather Hughes on August 2, 2018 | Comments: one comment
Related : Soap Opera, Spoiler, Television, The Young and the Restless 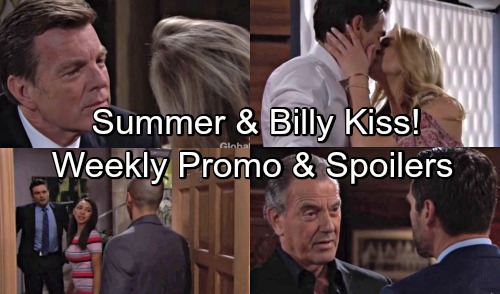 The Young and the Restless (Y&R) spoilers for the week of August 6-10 tease that several Genoa City residents will be in tight spots. First, Nick (Joshua Morrow) will face Victor’s (Eric Braeden) wrath again. He burned his father big time, so Vic will make it clear that he’s holding a grudge.

Victor will snarl that he’ll never forget how Nick ratted him out to the feds. He’ll probably add that big trouble’s brewing for Dark Horse. Nick started a war that he may not be able to win. Y&R fans know that Victor always comes roaring back, so he’ll inevitably kick off some dirty schemes soon.

Meanwhile, Cane (Daniel Goddard) will try to get Shauna (Camryn Hamm) back on his side. She blabbed about Lily’s (Christel Khalil) involvement in the crash, so Cane can’t undo the damage. All he can do is try to prevent more. The Young and the Restless spoilers say Cane will warn Shauna not to spill anything to the cops. He’ll be desperate to help Lily avoid charges and stay out of prison.

Devon (Bryton James) will spot Cane and Shauna’s tense conversation. He’ll quickly wonder what’s going on. Shauna’s still fed up with Lily, so she’ll be miffed at Cane for protecting her. Hilary (Mishael Morgan) and her baby are dead! Shauna will think Devon deserves some justice, so she’ll plan to help him get it. She’ll even let Devon know that Cane’s still doing cartwheels to save Lily’s bacon.

While Devon and Cane face off again, Jack (Peter Bergman) will pay Phyllis (Gina Tognoni) a visit. She makes amends with Billy (Jason Thompson) in Friday’s episode, but the peace probably won’t last. Phyllis and Billy have hot tempers, so another blowup could be brewing soon enough.

Regardless, Jack will want to check on his ex. He knows how close Phyllis and Hilary were, so that should come up again. Jack will just want to make sure Phyllis’ heart is healing. The Young and the Restless spoilers say Phyllis will be impressed by Jack’s support. He’ll lean in close and promise that he’ll always look out for her.

Uh-oh. Phyllis already has enough temptation with Nick! Now Jack seems to be inching his way toward Phyllis’ lips and potentially her bed. Of course, Billy’s not immune to temptation either. The Young and the Restless spoilers say Summer (Hunter King) will don something skimpy and get in the CEO’s face. She’ll throw herself at Billy in his office and ultimately plant a kiss on him.

Billy may shove Summer off eventually, but this smooch will inevitably lead to drama anyway. We’ll give you updates as other Y&R news comes in. Stay tuned to the CBS soap and don’t forget to check CDL often for the latest Young and the Restless spoilers, updates, and news.