The Young and the Restless Spoilers: Lily Headed to Prison – Christel Khalil’s Reduced Airtime Means Devastation for the Ashbys 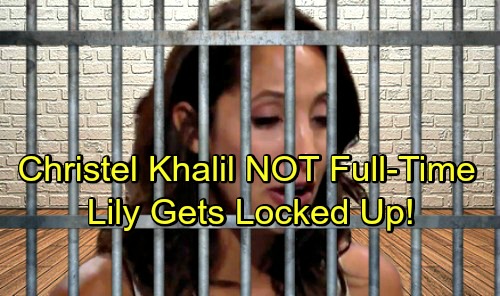 The Young and the Restless (Y&R) spoilers tease that Lily (Christel Khalil) will learn her fate soon. It looks like Devon (Bryton James) will stick to the plan and stand against Lily in court. He’s still suffering, so he wants Lily to face the same kind of pain.

After Hilary (Mishael Morgan) was killed in that car accident, Devon lost everything. His wife and child were wiped out, so he’d like to see Lily separated from her family. Devon believes that would give her a little taste of the pain he’s dealing with.

If Devon pushes for the maximum sentence, he’ll probably end up regretting it. Unfortunately, he’s too blinded by grief to think about that right now. The Young and the Restless spoilers hint that Devon will cling to his grudge and argue that Lily deserves 20 years behind bars.

Will Lily indeed be locked up? Since Devon intends on standing his ground, there may not be any way for Lily to wiggle out of this. Perhaps Y&R’s going to do another prison storyline. Some news about Christel Khalil’s status backs up that idea.

An Instagram announcement revealed that Khalil’s dropping from full-time to recurring. She insisted that it was her decision, but who knows what’s really going on behind the scenes? It’s possible The Young and the Restless needed that money and airtime for other characters.

Y&R just added Rey (Jordi Vilasuso), so they’ll be focusing on him in the coming months. Jason Canela (Arturo) also signed a contract not too long ago. Rey and Arturo’s sister, Lola (Sasha Calle), should become part of this story as well. That could mean the show’s shifting their attention from the Hamilton-Winters-Ashby unit to the Rosales family.

Khalil assured fans that she’d still be part of the CBS soap, but she won’t be around as much. A stint in the slammer would offer an easy explanation. Lily could still pop up for visits with Cane (Daniel Goddard), Charlie (Noah Alexander Gerry) and Mattie (Lexie Stevenson). They could share some heartbreaking conversations with her during trips to the state pen.

Of course, Y&R could let Lily off the hook and just have her live off screen most of the time. That works for other characters like Esther (Kate Linder) and Gloria (Judith Chapman). We don’t have to see people every day to know they’re living in Genoa City.

However, that would mean passing up a shot at some gripping material. Since Lily’s airtime is being reduced anyway, they need to go for the prison angle. Why not milk that drama for all it’s worth? It’d be great to see how the Ashbys handle the crisis.

The timing of Khalil’s announcement could be significant. Since Lily will head to court next week, maybe Khalil is warning viewers of what’s to come. She may be preparing everyone for Lily’s crushing blow. The Young and the Restless spoilers say some tough scenes are looming, so don’t miss all the emotional moments.

Do you think Lily’s going to prison? Is that how Y&R will take Christel Khalil from full-time to recurring? We’ll give you updates as other details emerge. Stay tuned to the CBS soap and don’t forget to check CDL often for the latest Young and the Restless spoilers, updates and news.