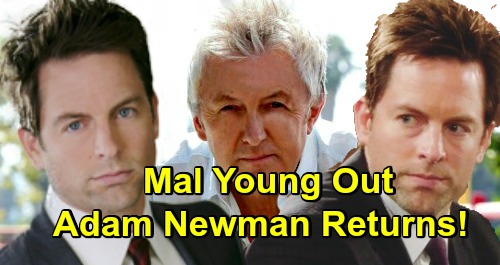 The Young and the Restless spoilers tease that news about executive producer and head writer Mal Young’s termination, or termed retirement, also links to hopes of Adam Newman’s (as most recently played by Justin Hartley) return. Young opted to never write this fabled character back into the story, though scores of fans have been calling for this revival since 2016.

Leaked information has been confirmed by Mal Young himself. He’s left the show. Whether that decision was his alone, was forced by TPTB above him, or resulted through a combination of each side’s forces isn’t yet fully known.

So, it appears as though Y&R is splitting Young’s position in two, which would restore those slots to a more traditional status. Clearly, handling both roles is an effort than anyone would find taxing.

As long as the executive producer and head writer get along, tapping two creative minds should prove helpful for daytime’s ratings’ leader. The rub connected to the three ending words in the last paragraph shouldn’t be overlooked, as Y&R still ranks number one among the four remaining broadcast network soap operas, regularly drawing more than four million live daily viewers in the United States and more than one million live daily viewers in Canada.

There were major segments of the audience and within the cast that didn’t like how Young handled his duties. Social media provided evidence of those opinions. Young’s working relationship among his backstage colleagues isn’t known.

Morina and Griffith, as was true with Young and all past heads, will now establish there mark. The choice of two Y&R backstage veterans is telling, as it indicates an open desire to build upon familiarity, rather than go in a new direction.

Regarding history, there hasn’t been a character within the last ten years who has been as electric as Adam. The 2009 recast that allowed Michael Muhney to fill this role propelled him into the soapy stratosphere. His stunning termination five years ago this month was followed by internet-fueled rumors regarding the exit that were seemingly debunked by a detective Muhney hired.

Muhney was eligible for rehire, as he interviewed to return to the show in the summer of 2014, but lost out to Hartley. The mere fact that Y&R considered Muhney indicates, if not confirms, that nothing that crossed legal lines was connected to his removal from the cast.

So, will Y&R’s new decision-makers, Morina and Griffith, agree to the sustained call for Adam’s return? If so, will another recast of this character take place, or will Muhney be tapped to return?

Heading daytime’s iconic steamer isn’t a task frail souls would choose. Here’s wishing Young, Morina, and Griffith the best in their careers and most importantly, lives. Each talented individual, along with every cast member, and behind the scenes hand has the respect of all solid Y&R fans.