The Young and the Restless Spoilers: Mal Young Reveals His Vision for Y&R – Shares Behind-the-Scenes Shakeups and Shockers

BY Marcy Cohen on September 28, 2018 | Comments: one comment
Related : Soap Opera, Spoiler, Television, The Young and the Restless 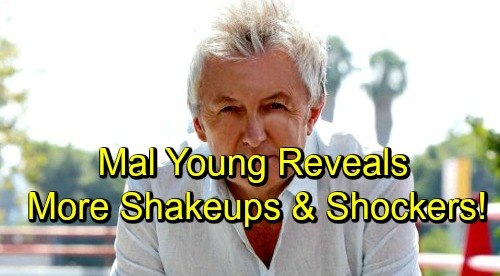 The Young and the Restless (Y&R) spoilers tease that more changes are brewing at the CBS soap. Mal Young, Y&R’s head writer and executive producer, is clearly a big fan of shaking things up. Many viewers haven’t been happy about all the departures and demotions. The addition of newbies has raised a few eyebrows, too.

Regardless of how you feel about it, Young is taking the show in a new direction. He discussed his latest vision in an interview with CBS Soaps in Depth. First, Young talked about the Rosales family. Arturo (Jason Canela) was recently joined by his brother and sister in Genoa City. Rey (Jordi Vilasuso) is making waves as a detective and Lola’s (Sasha Calle) on the scene as a food truck owner.

Young suggested that he wanted some folks who were blue collar. There are plenty of rich GC residents, so Young liked the idea of adding a family who wasn’t as well-off. Young also called the Rosales siblings “aspirational.” He argued that it was important to offer “a more realistic representation of life.”

Next, Young touched on some behind-the-scenes adjustments. “We’ve changed the way we write the show a bit,” Young admitted. “When I came in, I wanted to run it like a primetime show.” That explains why Y&R often skips ahead after cliffhangers. Some fans have complained since we don’t always get to see the proper reactions, but it seems Young just wants to keep the show moving.

Young also talked about adding some new writing positions. He brought in two storyliners to help him keep track of both long-term plans and day-to-day developments. Young promised he’s committed to giving Young and the Restless viewers “the best possible storytelling.”

We brought up cliffhangers, which is something Young plans to focus on in the coming months. He knows people expect a shocker at the end of Friday’s episode, but he wants to expand that idea. Young insisted, “It’s not good enough to have Cliffhanger Fridays – we’ve got to have a cliffhanger every day!”

Since some viewers only watch on certain days of the week, Young would like to change that. He hopes to give everyone a reason to tune in daily. Finally, Young pointed out that adding more humor couldn’t hurt. He was quick to add that he’d always balance it out with deep emotions.