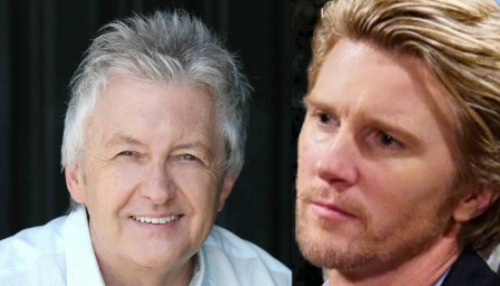 The Young and the Restless (Y&R) spoilers tease that some big bombshells are brewing in the case of missing J.T. Hellstrom (Thad Luckinbill)! Of course, Y&R fans know exactly where the abuser’s “hiding.” J.T.’s buried in Chancellor Park, but the cover-up crew hopes that secret never comes out.

However, that’s wishful thinking on a soap. Sooner or later, a secret this huge has to be exposed. The Young and the Restless spoilers say that day will come, but the show has a few more story layers to peel back first. Mal Young, Y&R’s head writer and executive producer, talked about that in an interview with Soap Opera Digest. He explained the lengthy storyline strategy and previewed what’s ahead.

Since this hot plot’s been simmering since spring, many Young and the Restless viewers are eager to see the conclusion. It looks like they’ll have to wait a bit longer. Young admitted there was a reason he chose this slow pace. He suggested that if the case had been solved quickly, it would’ve “felt too simplistic and too unreal.”

Instead, Young took an approach that was closer to a real-life case. “The truth is always more bizarre than fiction, isn’t it, because the guilty murderer makes mistakes, then the police find out something and they arrest the wrong people and I think that’s fascinating.” Hmm…is that a clue about what’s next?

Nick (Joshua Morrow) was arrested over his J.T. impersonation plot, so that may be what Young’s referring to. That was more about his mistakes than the cover-up crew’s though. It’d be interesting if someone else got arrested over what Nikki (Melody Thomas Scott) and the others did. They’d have to decide whether or not to come forward with the truth.

That choice might be tough depending on who was about to take the fall! Regardless, Young assured fans that the cryptic notes will lead to some great shockers. “Something has happened that they didn’t expect to cause the letters to be sent,” Young hinted. He added that Sharon (Sharon Case), Victoria (Amelia Heinle), Phyllis (Gina Tognoni) and Nikki would all “fight this in a very surprising way.”

Nikki and Victoria will be particularly fierce in this part of the story. They’re getting fed up with all the drama, so they’ll take steps to put an end to it. The main sender suspects right now seem to be Rey (Jordi Vilasuso), Tessa (Cait Fairbanks) and perhaps Mac (Kelly Kruger), who’s returning down the road.

Rey might be a bit too easy. Tessa’s certainly capable of a betrayal and she needs cash, but being wrongfully accused would be a better twist. Mac might be a fun threat out of nowhere option. Then again, Y&R could catch everyone off guard by tossing someone unexpected in the suspect pool.

Young promised some “big developments” as Rey closes in on the truth. The Young and the Restless spoilers say the coming weeks will rev up the tension and deliver a nightmare for our secret-keepers. We’ll give you updates as other Y&R news comes in. Stay tuned to the CBS soap and don’t forget to check CDL often for the latest Young and the Restless spoilers, updates and news.