BY Heather Hughes on October 10, 2018 | Comments: one comment
Related : Soap Opera, Spoiler, Television, The Young and the Restless 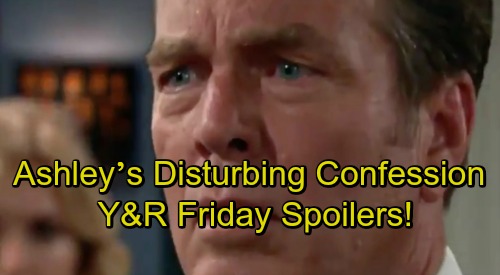 The Young and the Restless (Y&R) spoilers for Friday, October 12, tease that Ashley’s (Eileen Davidson) plan will quickly unravel. She thought she could handle Andrew (Coby Ryan McLaughlin) and put her devious actions behind her. However, Kyle (Michael Mealor) won’t stand for that. He feels like Ashley stabbed him in the back over his shady tactics.

Since Ashley’s tactics were apparently just as shady, Kyle intends to expose the hypocrite. As this storyline heats up, Jack (Peter Bergman) will grow increasingly curious, too. On Thursday’s new Y&R episode, October 11, Ashley lies to Jack and Kyle about the blackmail. She argues that she made shell company payments to handle an old problem of Billy’s (Jason Thompson).

Ashley even gives Andrew one last payment as a parting gift and sends him on his way. Unfortunately, Ashley won’t get rid of Andrew that easily. He’s got some serious dirt, so he wants serious money. The Young and the Restless spoilers say Andrew will resurface on Friday for more Abbott family drama.

Jack will nearly pay Andrew for info, but Ashley will ultimately stop him. The truth’s going to come out anyway, so Ashley might as well give it for free. Y&R fans can probably expect good news and bad news for Jack. The good news is John (Jerry Douglas) is most likely his biological father after all. The bad news is Ashley’s been manipulating Jack for months. His own sister! How could she?

At Jabot, Jack will throw a temper tantrum and hurl a chair through glass. He’ll be furious with Ashley for deceiving him like this. The Young and the Restless spoilers say the aftermath of this revelation will continue next week, so stay tuned for extra shockers.

Meanwhile, another family will face less traumatic issues. Lola’s (Sasha Calle) starting a hot romance with Kyle (Michael Mealor), but Arturo (Jason Canela) and Rey (Jordi Vilasuso) won’t approve of her pick. Arturo might voice his opinion and let it go, but that’s not how Rey rolls. Instead, Rey will do a background check on Kyle and spell out all the reasons Lola shouldn’t be with him.

Kyle’s gravedigging fiasco will come up during Rey and Lola’s next confrontation. She won’t care about Kyle’s arrest and she certainly won’t care what Rey thinks about her love life. The Young and the Restless spoilers state that Lola will get fierce and fight for what she wants.

It sounds like major excitement will hit Genoa City. We’ll give you updates as other Y&R details emerge. Stick with the CBS soap and don’t forget to check CDL often for the latest Young and the Restless spoilers, updates and news.