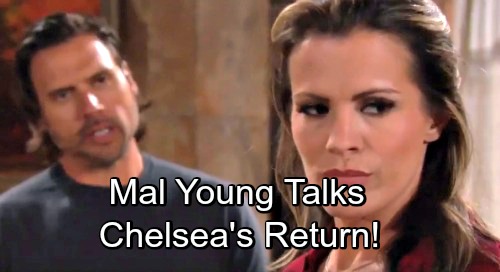 The Young and the Restless (Y&R) spoilers tease that a big comeback is brewing. There’s no set timetable for this return, but the CBS soap definitely has plans for it. If you’re a Chelsea (Melissa Claire Egan) fan, you have something to look forward to. Mal Young, Y&R’s head writer and executive producer, is convinced that Chelsea will make her way back to Genoa City.

In an interview with TV Insider, Young opened up about Egan’s departure and how the show handled it. The Young and the Restless fans will recall that Chelsea’s exit was left open-ended. After Hilary (Mishael Morgan) was later killed off, some viewers were left scratching their heads. Why did Chelsea live to make her getaway? How come Hilary had to die in Devon’s (Bryton James) arms?

It all boils down to the actresses’ plans for the future. According to Young, Morgan saw big opportunities ahead of her. She supposedly suggested that a Y&R return wasn’t likely. That doesn’t quite line up with the rumblings everyone heard from Morgan’s agent, but that’s where Young stands on the issue. He didn’t want to recast, so he gave Hilary an explosive sendoff.

As for Egan, Young determined that her comeback was pretty much certain. He thought it’d be better to send Chelsea off canvas for a while and reintroduce her down the road. If a popular cast member is willing to return, you might as well leave the door open for it!

“When Missy [Claire Egan, ex-Chelsea] said she wanted to try new things we got the feeling that Chelsea was going off on a little trip and she wasn’t [leaving forever],” Young said. “Missy and I talked about how this isn’t the end of the story.” That’s confirmation that there’s more to come. The Young and the Restless spoilers say another chapter will unfold eventually.

Young pointed out that Chelsea has Adam’s (Justin Hartley) kid, so she’s got some important ties to Genoa City. Victor (Eric Braeden) will certainly want to see his grandson at some point. He can’t just let Connor (Gunner and Ryder Gadbois) fade into oblivion. Victor has to consider Adam’s legacy and the future of Newman Enterprises!

Bottom line, Young is sure we’ll see Chelsea return to town. “That character will walk back in one day,” Young insisted. “There’s no doubt about it.” If Young has no doubts, Y&R fans shouldn’t have them either! We’ll give you updates as other news comes in. Stay tuned to the CBS soap and don’t forget to check CDL often for the latest Young and the Restless spoilers, updates, and news.