The Young and the Restless Spoilers: Cane Reels as Lily’s Locked Up – Finds New Love or Fades to the Background? 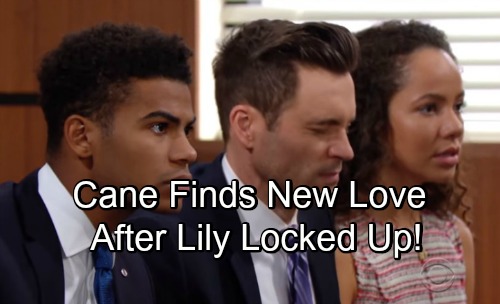 The Young and the Restless (Y&R) spoilers tease that Cane (Daniel Goddard) and Lily’s (Christel Khalil) marriage could be headed for trouble. These two have faced their fair share issues over the years, but they always seem to find their way back to each other. Unfortunately, Lily and Cane could soon face their toughest crisis yet.

You’ve probably heard by now that Christel Khalil is no longer on contract. She announced her decision to drop down to a recurring role, but many Y&R fans suspect it was the show’s choice instead. Regardless, Lily won’t be on our screens as much. That makes us wonder what’s ahead for Cane and the rest of the Ashby family.

If The Young and the Restless puts Lily behind bars, where does that leave her devastated hubby? It’s possible Lily will become depressed and push Cane away. She may deny visits and urge him to move on without her. Lily could file for divorce! This ordeal is bound to take a toll on her, so there’s no predicting how she might react in the slammer.

Lily warned that she didn’t think she could survive prison. That tells us things could be pretty rough for her in there. Cane will undoubtedly fight to keep his relationship alive, but Lily may force him to let go. If so, Cane might get a new love interest. Even if Lily and Cane keep their marriage intact, Cane could always cheat again. He’ll be awfully lonely if Lily scores a lengthy stint in the state pen.

Of course, there’s an alternative that also seems likely. Since Lily’s fading to the backburner, Y&R could send Cane there as well. Daniel Goddard could be the next actor dropped to recurring. Cane might want to get away from all the reminders of Lily in Genoa City. He could take a job elsewhere and still pop in to see Lily if she’ll allow it.

As for the twins, their time on Y&R could be winding down, too. Reed (Tristan Lake Leabu) was written out, which left Mattie (Lexie Stevenson) without a love interest. She hasn’t been doing much of anything since Reed departed. Charlie had a mini storyline with Shauna (Camryn Hamm), but it’s clear that The Young and the Restless isn’t really committed to the teen scene.

Lily’s diminished airtime could be a sign that Cane, Mattie and Charlie will all follow suit. Y&R will have to find some way to squeeze in Rey (Jordi Vilasuso), Arturo (Jason Canela) and Lola (Sasha Calle) – not to mention new Jabot chemist Kelly Jones (Alice Hunter)! It sounds like we’ll have to keep an eye on the Ashby situation.