The Young and the Restless Spoilers Next 2 Weeks: Jack’s World Turned Upside Down – Nick’s Stunning News – Billy’s Luck Runs Out 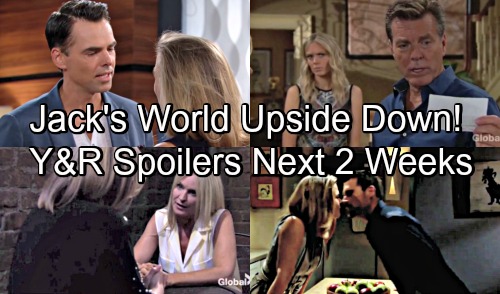 The Young and the Restless (Y&R) spoilers for the next two weeks tease that the drama will heat up in Genoa City. During the week of September 3-7, Lily (Christel Khalil) will learn whether she’s headed to prison or back home with her family. Y&R fans can expect another bombshell before this court session comes to an end.

Meanwhile, Rey (Jordi Vilauso) deal with a thorn in his side. Abby’s (Melissa Ordway) growing curiosity will cause a few problems. She’s determined to find out the reason for Arturo (Jason Canela) and Rey’s tension, so expect some digging. Rey will do his best to dodge Abby’s questions and get rid of her, but we all know she can be pretty persistent.

Over with Sharon (Sharon Case), she’ll also be on Tessa’s (Cait Fairbanks) case. Sharon doesn’t trust this girl at all, so she’ll try to uncover any troubling facts. Sharon’s only goal will be watching out for Mariah (Camryn Grimes).

Summer will give her mom an earful, but Phyllis will think the move was necessary. She’s fed up with Summer’s antics, so they had to get away. Summer will suggest this is proof that she poses a threat. She’ll feel like Phyllis is getting desperate, but her raging mother won’t agree.

The week of September 10-14 will deliver another round of confrontations. The Young and the Restless spoilers say Billy (Jason Thompson) will take a major risk, so that doesn’t sound good. Billy’s luck is destined to run out eventually.

Back with Nick, he’ll end up stunned. Could Sharon break down and reveal the truth about J.T. (Thad Luckinbill)? That’s worth considering. However, the more likely option is that Summer will threaten to blab despite Nick’s bribe. She’ll at least let Phyllis know it’s a possibility.

Elsewhere, Victoria (Amelia Heinle) will finally drop her guard a bit. Since she refuses to open up to her therapist again, Nate (Brooks Darnell) is the next best thing. Victoria probably won’t spill too much, but she could at least explain how she’s feeling. Nate would gladly help Victoria deal with her pain.

Other Young and the Restless spoilers say Jack’s (Peter Bergman) world will be turned upside down. He’ll be taken aback by some new information, so this is undoubtedly about his father search. Will Jack’s bio dad finally be revealed? Maybe not just yet, but Jack will definitely get closer.

It sounds like viewers will want to check out these hot episodes. We’ll give you updates as other Y&R news comes in. Stay tuned to the CBS soap and don’t forget to check CDL often for the latest Young and the Restless spoilers, updates and news.