The Young and the Restless Spoilers: Neil Benefits From Ashley’s Love – Escape From Hilary Tragedy Welcomed 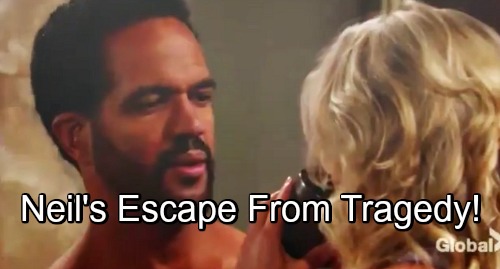 The Young and the Restless spoilers tease that Neil (Kristoff St. John) will definitely benefit by having Ashley (Eileen Davidson) in his life. The new pairing is a sweet reflecting upon two good souls who are in need of compassion. Neil’s life hasn’t been great lately. He cherishes family, which is why he’s been reeling.

The death of Hilary (Mishael Morgan) was an accident. But Devon (Bryton James) doesn’t see it that way at all. He wants his adoptive sister to be brought to justice for what happened and if she suffers, so be it.

Lily (Christel Khalil) didn’t want to drive through the red light in Genoa City. But that fateful day was sparked by Shauna’s (Camryn Hamm) reckless action to first call Charlie (Noah Alexander Gerry), because Hevon’s penthouse was empty, and then to run out the door when Lily and Hilary were getting into it about Sharlie.

Devoted Y&R fans may believe that St. John is tapping into his own real life tragedy when he worked through the Hilary-loss scenes. Pain connected to the unexpected, permanent loss of a loved one never truly subsides. Dealing with that issue is also something that each person handles individually and across an undefinable amount of time.

Neil feels helpless as his children battle. He and Dru (played by the great Victoria Rowell) raised Lily and Devon with family solidarity in mind. Devon has turned from that wise life lesson because he’s blinded by Hilary’s death and the death of what was to be their first-born child.

All of the above allows Ashley’s entrance into Neil’s romantic life to be apt. While they’ve been friends for many years and briefly explored extending their relationship in the past, Nashley is directly considering the possibility of a full connection now.

Ashley has been dealing with family-based drama of her own for more than a year. Dina (played to ultimate perfection by the astounding Marla Adams) created yet another round of upheaval in the so-called Abbott family’s life when she returned from Paris. Later, her Alzheimer’s diagnosis altered everyone’s perceptions, while also sparking Jack’s (Peter Bergman) paternity mystery.

Through the Abbott issues, Ashley left Jabot, worked for Victor (Eric Braeden) for a handful of weeks, and then recently returned to the company John (Jerry Douglas) founded. Because Jack thinks he’s not an Abbott, Ashley had to persuade their brother Billy (Jason Thompson) to take over as Jabot’s Chief Executive Officer, which is producing a shaky ride.

Neither Neil, nor Ashley were looking for romance. But that’s happened, as those of us who’ve experienced the same shared feeling understand. Yes, this pairing should prove to be a solid couple.

Davidson recently announced her voluntary exit from the show, with a fall write-out for Ashley planned for fall. So, Nashley’s run might be brief, unless Davidson’s character is recast.