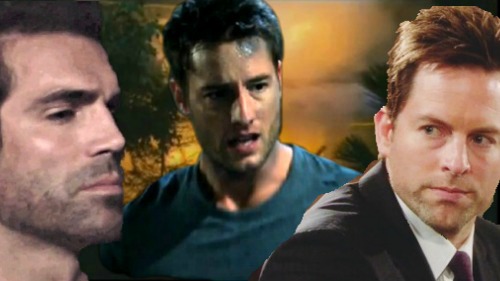 The Young and the Restless spoilers tease that the introduction of Rey (Jordi Vilasuso) can lead to the return of Adam Newman (as most recently played by Justin Hartley). How this happens will compel Y&R fans to watch their favorite soap.

Devoted viewers don’t yet know Rey’s story, but they know Adam’s. He is the son of Victor Newman (Eric Braeden) and Hope Adams (Signy Coleman).

The terrific early 1990’s arc that wrote Victor to the Kansas farm, where Hope lived, was spurred by the Moustache’s departure from Genoa City.

Victor accidentally caused Nikki (Melody Thomas Scott) to fall down the stairs at the original ranch. She was pregnant with Jack’s (Peter Bergman) child at the time and lost the baby, forever fueling a key element of the animus that exists between Y&R’s lead male characters.

Baby and then toddler Adam came to live with his dad in Wisconsin after Victor took him and his mother back to GC. Hope tired of the big city life and Victor’s devotion to Newman Enterprises. So she left her husband and returned to her farm with Adam.

Years later Y&R SORAS’d Adam into an adult, as originally embodied by Chris Engen, who played the character for approximately one year. Michael Muhney assumed the role in 2009 and delivered an indelible run through 2014. His dramatic release from the cast was followed by tales of real, imagined, and exaggerated controversy.

However, Muhney was eligible for rehire, as seemingly proven by his audition to return to the Adam role in the summer of 2014, just months after he’d been let go. But Justin Hartley was cast instead and went on to play Adam for two well received years.

Adam was written to a classic soapy death in September 2016, meaning that there is no conclusive evidence that his life actually ended. The cabin explosion Chloe (Elizabeth Hendrickson) caused left Adam’s DNA remnants, as collected by Paul’s (Doug Davidson) CSI-like team.

Muhney has publicly lobbied for his return to the show via social media for the past four years. This summer he also offered what seemed to be a cryptic statement about his professional future. The request that his fans remain patient at least implied that a Y&R return remained possibly, or was even going to happen. Though hope, not referencing Adam’s mother in this instance, surely drives the desires of Muhney’s fans.

So, what will be Rey’s connection to that old storyline? Well, he’s Paul’s new lead investigator in the open J.T. (Thad Luckinbill) case. Luckinbill’s character would be another guy who is presumed dead and possibly may be.

Rey has been tasked with exploring the pieces connected to J.T.’s unusual exit from GC. After that storyline plays out, or maybe, while it’s happening, Rey could easily veer onto Adam’s trail.

Y&R, like all daytime dramas, is powered by compelling personalities. There has arguably been none better than Adam within this millennium. So why not have Vilasuso, an incredibly talented actor in his own right, become the hero who discovers that this great character is still alive?