The Young and the Restless Spoilers: Mal Young Teases Story Shockers and Special Episodes – Y&R Has Big Moments in Store 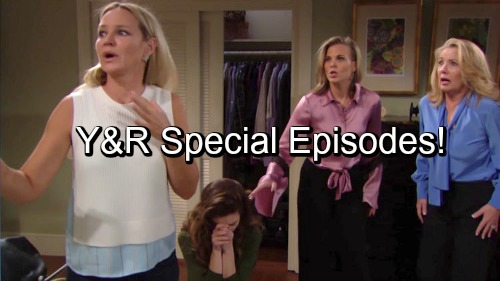 The Young and the Restless (Y&R) spoilers tease that the CBS soap has some special things in store for fans. Mal Young, the show’s head writer and executive producer, wants to get everyone buzzing about the chaos in Genoa City. He has some intriguing episode ideas that he hopes will do the trick.

In an interview with CBS Soaps in Depth, Young reflected on a strategy that’s worked for Y&R in the past. He wants to rely on this strategy at least a few more times in the year ahead. “We are going to do more of those standalone episodes,” Young said. He mentioned the one back in the spring, which featured the girls’ night gang and J.T. (Thad Luckinbill), as an example.

“I asked the writers to come with me on the journey to do an episode where it’s four women in the living room for 30 minutes,” Young said. He admitted it was scary, but in a good way. Young’s OK with taking risks like this since he’s got a stellar cast backing him up. He’d also like to work in a two-character episode if possible, which would be even more challenging.

“It would be talked about,” Young said. “You need those moments where you are part of the national conversation. Twitter, social media…it’s the new water cooler. You don’t want to miss out on something. That’s the benefit of continuing drama.”

The Young and the Restless fans definitely won’t want to miss the twists ahead in the J.T. saga. During the next chapter, we’ll see some tense moments for the cover-up crew. Victoria (Amelia Heinle) will take charge like never before. Nikki (Melody Thomas Scott), Phyllis (Gina Tognoni) and Sharon (Sharon Case) will also have to do their part, but it’s Victoria who’ll emerge as a real leader.

As for what’s happening down the road, Young’s hoping to think outside the box and keep catching viewers off guard. “We’re pushing ourselves, trying out our green screen, pushing the writers to do different things,” he teased. Young has some interesting ordeals in mind for several characters, so he’s urging Y&R watchers to come along for the ride.