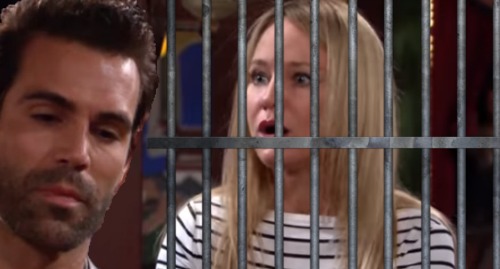 The Young and the Restless spoilers tease that the daytime horror storyline that’s been centered on J.T. Hellstrom (Thad Luckinbill) will end in November. This Sweeps month is one of the four annual periods (also including February, May, and July) where television advertising rates are set. But Sharon (Sharon Case) isn’t concerned about Y&R’s revenues, instead Rey’s (Jordi Vilasuso) constant glare has her worried.

It’s very fitting that Genoa City will experience a grave dig during Halloween week. Honoring the infamously great daytime Gothic soap, Dark Shadows, Y&R is writing its own ghoulish storyline to a conclusion.

Stretched since the spring, in classic soapy fashion, the shocking tale that saw Luckinbill’s just-returned character accidentally killed by Nikki (Melody Thomas Scott), actually began with Paul (Doug Davidson) as the lead investigator. That was natural as the show’s second-longest tenured actor, trailing only Kate Linder (Esther) was the chief of police.

Sadly, the past tense must be used regarding Davidson, as his status seems to be recurring at best. Possibly, this great actor will remain with the show and return to help wrap the final storyline he was linked to and maybe even continue on with others.

Nikki, Sharon, Vickie (Amelia Heinle), and Phyllis (Gina Tognoni) are seen digging in Chancellor Park hours after Jill (Jess Walton) agreed to allow her statue honoring Katherine (Jeanne Cooper) to be removed from atop J.T.’s illegal grave site. Of course Nikki didn’t tell Jill, or her chosen excavator, Arturo (Jason Canela), that she wasn’t interested in fixing pipes. Instead she wants to remove whatever remains of the man she and the coverup crew buried.

Vilasuso joined daytime’s reigning steamer within the last few months and quickly became engrained with GC’s elite. He soon deduced that Sharon was linked to J.T.’s disappearance and was likely his best hope at solving the open case he’d been recruited to solve.

Intriguingly, Rey appears to be romantically interested in Sharon. Whether she’s attracted to him remains to be seen. Considering Shick’s remarriage fail, it’s possible that Shey becomes the next big couple.

If, or until the above happens Rey will likely need to arrest Sharon and possibly, jail her as well. That won’t exactly endear him to her, but surely will provoke Nick’s (Joshua Morrow) next attempt to revive Shick.

Likely November developments will create scenarios where Sharon could see Nick in a restored light. Whether she’s in prison when that happens is just another reason why devoted Y&R fans will keep watching.