BY hellodrdavis on October 29, 2018 | Comments: 2 comments
Related : Soap Opera, Spoiler, Television, The Young and the Restless 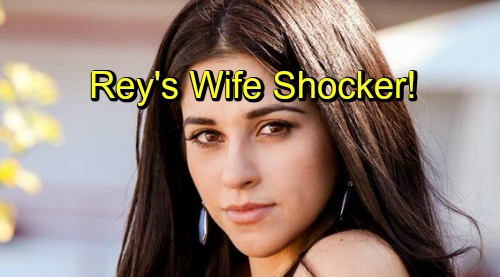 The Young and the Restless spoilers tease that we’ll soon meet another member of the Rosales family…Rey’s (Jordi Vilasuso) wife Mia (Noemi Gonzalez). Rey burst on the scene this summer as the new police detective investigating J.T.’s (Thad Luckinbill) disappearance, and he’s had a lot of mystery surrounding him.

Rey hasn’t been entirely forthcoming about himself since he arrived in Genoa City. He pretended to be a debt collector and ingratiated himself into the GC scene without telling anyone he was a police detective. And one thing that Rey is particularly tight-lipped about is the subject of his wife. All we know from Rey is that he and his wife are estranged.

Perhaps Mia herself can clear up some of the mystery surrounding Rey and the Rosales family. It doesn’t sound like Rey and Mia are on good terms, so she might not hesitate to blab family business to an outsider or two. Nick (Joshua Morrow) might be very interested in any insights Mia can offer about Rey, since he wants to keep Rey away from Sharon (Sharon Case).

In fact, Nick and Mia might be able to help each other a great deal, especially if Mia is interested in reconciling with Rey. They could work together to split apart Rey and Sharon’s friendship. Mia could find herself jealous of Sharon’s friendship with Rey and could take an instant disliking to Sharon.

And on a larger level, Mia’s presence on canvas might lead to some revealed secrets about the Rosales family. Y&R spoilers say that Abby (Melissa Ordway) will learn something disturbing about Arturo’s (Jason Canela) past. Might that information come to her by way of Mia?

It will be interesting to see Mia’s interactions with Rey, Arturo, and Lola (Sasha Calle), and even more interesting to see what we learn about this mysterious family. Are you excited for Mia’s arrival? Stay tuned to the CBS soap and don’t forget to check CDL often for the latest Young and the Restless spoilers, updates, and news.