BY Heather Hughes on April 6, 2018 | Comments: one comment
Related : Soap Opera, Spoiler, Television, The Young and the Restless 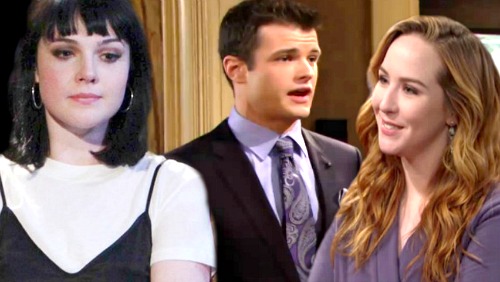 The Young and the Restless (Y&R) spoilers tease that Mariah (Camryn Grimes) will open up to someone next week. She’ll drop her guard and get real about what she’s been dealing with, so it sounds like some gripping scenes are ahead. Who will Mariah talk to about her problems? Kyle (Michael Mealor) might be a good option.

Shortly after Kyle returned to town, he took a moment to catch up with Mariah. Kyle was clearly glad to see her again. Was that the first sign of a new pairing? Mariah’s been going through a bit of a dry spell in her love life. There just wasn’t enough of a spark with Devon (Bryton James). Mariah wanted to be with Tessa (Cait Fairbanks), but faced a brutal rejection instead.

Of course, Tessa later stole Mariah’s journal and used the lyrics for her own selfish gain. That undoubtedly made Mariah’s feelings more complicated. She patched things up with Tessa in terms of their friendship, but she suggested that the “Teriah” train had left the station headed somewhere far away.

If that’s true, Mariah’s going to need another Y&R love interest. Kyle and Mariah might actually make a nice match! They both have a hard shell, but there are some warm hearts under there. We haven’t seen the new Kyle’s softer side yet, but you can bet it’s coming. The Young and the Restless will have to tone down his attitude sooner or later. Kyle just had to come out swinging for his debut.

Perhaps Kyle and Mariah’s next chat will serve as a step in that softer direction. Mariah had a hard time dealing with her feelings for Tessa, so she was reluctant to confide in anyone at first. However, Mariah eventually shared the news with Kevin (Greg Rikaart), Sharon (Sharon Case) and Devon.

It was a bit of a disaster when Noah (Robert Adamson) was brought in the loop, but at least the truth was out. Mariah’s becoming more comfortable opening up to people, so maybe she’ll spill her story to Kyle. Now that Kevin’s gone, Mariah doesn’t have a solid sounding board anymore. She can always seek advice from and vent to Sharon, but sometimes you need a friend instead of a mom.

Will Kyle be the pal Mariah needs? How long will it take that friendship to develop into something more? The Young and the Restless spoilers say a new love story could be brewing, so Tessa may struggle with jealousy before you know it! We’ll give you updates as other details emerge. Stick with Y&R and don’t forget to check CDL often for the latest Young and the Restless spoilers, updates and news.