The Young and the Restless Spoilers: Mariah and Tessa Move In Together – Shocking Outcome Makes Mariah Regrets Decision 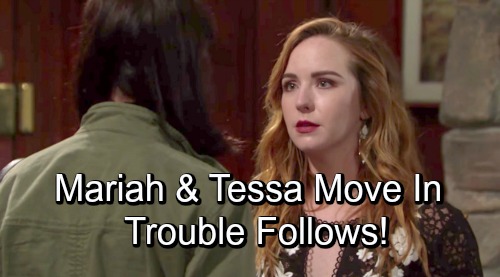 The Young and the Restless spoilers tease that Mariah (Camryn Grimes) and Tessa (Cait Fairbanks) will soon take the next step in their relationship. The two ladies have been getting closer for months now, and they just got her-and-her tattoos to symbolize their bond.

But soon, Mariah and Tessa will start thinking about exactly where their relationship is headed and what the next step is. Eventually, the topic of moving in together will come up.

Moving in together certainly makes sense from Tessa’s standpoint. She’s strapped for cash and every spare penny is going toward the bad guys who helped smuggle her sister out of the country. She could really use a roommate to help cut down costs, so she’ll probably be excited about the idea of moving in together with Mariah.

Of course, moving in with Tessa would be a much bigger deal for Mariah. Mariah’s used to having her own space at Sharon’s (Sharon Case) and she loves spending time with Sharon and Faith (Alyia Alyn Lind). It would be a much riskier move on Mariah’s part to leave the nest and branch out with Tessa.

But it sounds like the ladies will take the plunge and start living together. Whether they live in Tessa’s current apartment or get a place of their own together remains to be seen, but there is some indication that things might not go so smoothly.

Y&R spoilers say that Mariah will soon learn that you don’t really know a person until you’ve lived with them, so it sounds like there might be trouble in paradise. But will the problems be minor, such as who gets the bathroom first in the mornings, or will they be so serious that Mariah considers moving out?

And there’s always the situation with the bad guys who are on Tessa’s case for the money she owes them. Living with Tessa could put Mariah in greater danger if the guys start to target Tessa or the people she loves. Maybe the idea of living together isn’t such a great idea after all.

Do you think Tessa and Mariah will be able to live together in harmony? Stay tuned to the CBS soap and don’t forget to check CDL often for the latest Young and the Restless spoilers, updates, and news.