The Young and the Restless Spoilers: Big Returns, Exploding Revelations and an Exciting Debut – Comings and Goings 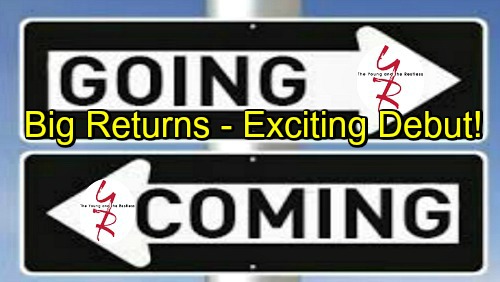 The Young and the Restless (Y&R) spoilers reveal that we’ve got some comings and goings news to pass along. First, let’s discuss an imminent return. Mac (Kelly Kruger) is headed back to Genoa City this week of November 5 for an important task. She’ll be a key player in some shocking story developments.

After Arturo (Jason Canela) finds J.T.’s (Thad Luckinbill) watch in Chancellor Park, he’ll give it to Rey (Jordi Vilasuso). Rey will be able to identify it thanks to the engraving and some pictures of J.T. wearing it. He’ll end up summoning Mac for some questions, so she’ll show up in town and get interviewed.

Mac will be happy to cooperate in any way she can. She wants answers regarding J.T.’s disappearance just as much Rey does. The Young and the Restless spoilers say Rey will get some useful information. He’ll hope he can keep the momentum going as he officially declares this a murder investigation. The press conference and media blitz will naturally fill the cover-up crew with dread.

Victoria (Amelia Heinle), Sharon (Sharon Case), Nikki (Melody Thomas Scott) and Phyllis (Gina Tognoni) will all struggle to stay calm. It turns out another major player in the J.T. story will return eventually. Tristan Lake Leabu will reprise his role as Reed starting December 10. That’ll bring another layer of drama, especially for Victoria and Nikki.

Reed’s sure to be torn apart by his father’s death, but things should get worse once he finds out his mother and grandmother have been lying to him. The J.T. chaos is going to explode over the next couple months, so Y&R fans won’t want to miss it. As for Rey, he’ll have to do more than crack this case. Rey will also have to face his estranged wife’s arrival, so get ready for Mia’s (Noemi Gonzalez) debut.

The Young and the Restless spoilers say Mia will bring secrets beginning November 12. She’ll reignite Arturo and Rey’s feud, so Lola’s (Sasha Calle) bound to get caught in the middle. That’s it for comings and goings! We’ll give you updates as other Y&R details emerge. Stick with the CBS soap and don’t forget to check CDL often for the latest Young and the Restless spoilers, updates and news.