The Young and the Restless Spoilers: Thursday, May 31 Update – Nick Plans San Diego Move with Sharon – Jack Faces Another Blow

BY Heather Hughes on May 30, 2018 | Comments: one comment
Related : Soap Opera, Spoiler, Television, The Young and the Restless 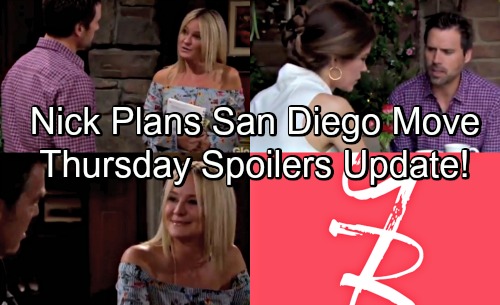 The Young and the Restless (Y&R) spoilers for Thursday, May 31, tease that Devon (Bryton James) will drop a hint to Neil (Kristoff St. John). He’ll suggest that he respects Hilary’s (Mishael Morgan) contributions at Hamilton-Winters, but there’s a bit more going on between them. When Neil grills him, Devon won’t be willing to spill much.

At Crimson Lights, Hilary will tell Phyllis (Gina Tognoni) that she’s pregnant. She’ll try to come up with perfect way to tell Devon, but it won’t be easy. Jack (Peter Bergman) will make a pitch to Devon and Neil on Thursday, so that’ll serve as one obstacle for Hilary. He’ll hope to sell them on the idea of joining forces in business, which means Hilary’s baby announcement will have to wait.

Neil and Devon will agree to consider making Jack part of the team. However, they’ll dismiss the idea privately. More disappointment’s in Jack’s future! Later, Hilary will finally have a chance to deliver her big news. She’ll come up with a creative plan involving photos. Once Devon learns about their impending bundle of joy, he’ll pull Hilary in for a hug.

Elsewhere, Shauna (Camryn Hamm) will talk to Charlie (Noah Alexander Gerry) about her family issues. Her parents bailed on her to take care of her brother, so Shauna’s been living with an aunt. Things aren’t going well at home and that’s why Shauna needed to hide for a while. Charlie will hold her close and vow to figure something out.

Other Young and the Restless spoilers say Nick (Joshua Morrow) will make a shocking suggestion. He’ll tell Sharon (Sharon Case) that he wants to pack up and move to San Diego. There’s a job offer waiting for him there, but Sharon will suspect he’s leaving something out.

Nick will confess that there’s some custody drama brewing with Victor (Eric Braeden). Sharon won’t believe Vic could really defeat Nick in court. She’d be OK with moving out of town, but she won’t think Nick should let Victor run him off.

Later, Jack will learn his Hamilton-Winters proposal was declined. He’ll bump into Sharon and the topic of new beginnings will come up. They’ll share a nice moment and appreciate each other’s friendship. Over with Victoria (Amelia Heinle), she’ll spar with Abby (Melissa Ordway) and hear the latest info from Nick. Victoria will find out that Nick could be leaving, but he’ll note that he still has to get Sharon on board.

At home, Nick will bring up the idea of moving again. He’ll insist that he truly believes it’s the right call, but Y&R fans know Victor won’t feel the same way! He’s sure to speed up the custody battle if Nick moves forward with this. The Young and the Restless spoilers say the conflict’s about to heat up.

Across town, Arturo (Jason Canela) and Abby will still be gushing over their Miami trip. They’ll lean in for a hot kiss just as Nikki (Melody Thomas Scott) appears. She won’t be happy, so expect Abby to get an earful this Friday. We’ll give you updates as other Y&R details emerge. Stay tuned to the CBS soap and don’t forget to check CDL often for the latest Young and the Restless spoilers, updates, and news.