BY hellodrdavis on November 2, 2018 | Comments: 2 comments
Related : Soap Opera, Spoiler, Television, The Young and the Restless 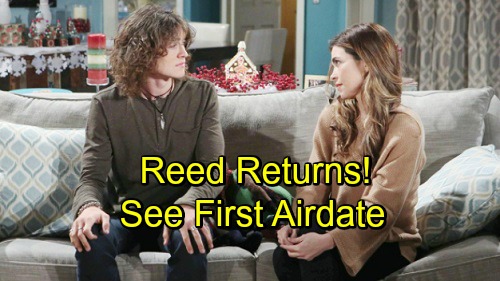 The Young and the Restless spoilers is pleased to pass on some exciting news about the return of a popular Y&R star. Tristan Lake Leabu will be returning to Y&R to reprise his role as Reed Hellstrom, the son of J.T. Hellstrom (Thad Luckinbill) and Victoria Newman (Amelia Heinle).

As reported by Soaps In Depth, Tristan will be first seen back on-screen on Monday, December 10. Reed’s been off in boarding school for the past several months, and he’ll return to town after his father’s missing persons case officially becomes a murder investigation.

Reed was previously under the impression that his father had taken off and abandoned him, but now that the forensic evidence makes it clear that J.T. is dead, he’ll need to grieve and lean on his mother for support.

Of course, what Reed doesn’t know is that his grandmother killed his father, and his own mother helped dispose of the body and cover the entire thing up. Victoria’s had a hard time with the whole series of events, and things will only get harder when Reed shows up and starts asking questions.

Tristan previously portrayed Reed Hellstrom from January 2017 to April 2018, and he received a Daytime Emmy nomination for his portrayal. He has also appeared in several movies and TV series, including Superman Returns and Hawaii Five-0.

Are you excited to see Tristan back on Y&R? Stay tuned to the CBS soap and don’t forget to check CDL often for the latest Young and the Restless spoilers, updates, and news.