The Young and the Restless Spoilers: Comings and Goings – Returns, Recasts and Shocking Drama

BY Heather Hughes on March 25, 2018 | Comments: one comment
Related : Soap Opera, Spoiler, Television, The Young and the Restless 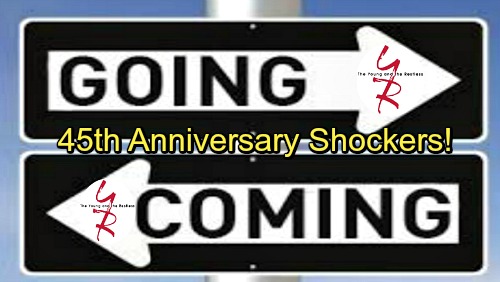 The Young and the Restless (Y&R) spoilers tease that we’ve got plenty of comings and goings news to pass along. The week of March 26-30 will bring quite a celebration. Y&R’s celebrating a major milestone, so some big returns are on the way. Let’s run down the list of all the 45th anniversary comebacks.

For starters, Jill (Jess Walton) will pop up in Genoa City again. She’ll take a trip down memory lane, so Billy (Jason Thompson) will have to listen to all her stories. Lorie Brooks (Jaime Lyn Bauer), Leslie Brooks (Janice Lynde) and Julia Newman (Meg Bennett) will also arrive in GC this week. The Young and the Restless will certainly include them in all the fun festivities.

Of course, we have to mention the old Glo by Jabot crew. Some fan favorites of the past will come home for the Walnut Grove bicentennial. The Young and the Restless spoilers say we’ll see Mackenzie “Mac” Browning (Kelly Kruger), Raul Guittierez (David Scott Lago) and Brittany Hodges (Lauren Woodland). They’ll share some warm reunions as well as a few tense ones!

In Y&R recast news, Michael Mealor will make his debut as Kyle in the week ahead. He’ll get caught in Abbott family drama right away. It turns out Kyle’s been scheming behind his father’s back. Jack will find evidence of Kyle and Victor’s (Eric Braeden) secret plot, so viewers can expect big trouble.

It’s worth mentioning that Scott Reeves (ex-Ryan McNeil) was recently spotted at the CBS studio. He made some pictures with Doug Davidson (Paul) and Kristoff St. John (Neil), so it’s possible that a Y&R comeback’s brewing. Reeves’ character is deceased, but they could always provide a soapy explanation or give him a new character to play.

Even if it was just a personal visit, the cast was undoubtedly happy to see Reeves roaming the halls again. The Young and the Restless spoilers say some bombshells are looming, so you never know who might show up! Stay tuned to see all the shockers ahead on the CBS soap.

Which returns are you looking forward to the most? Are you ready for the big 45th anniversary celebration? We’ll give you updates as other details emerge. Stay tuned to Y&R and don’t forget to check CDL often for the latest Young and the Restless spoilers, updates and news.