The Young and the Restless Spoilers: May Sweeps Shockers – Check Out the Hot Drama Ahead

BY Marcy Cohen on April 23, 2018 | Comments: one comment
Related : Soap Opera, Spoiler, Television, The Young and the Restless 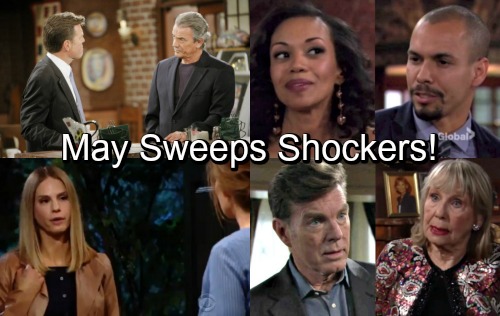 The Young and the Restless (Y&R) spoilers tease that the excitement’s about to rev up in Genoa City. May sweeps will bring some wild moments, so Y&R fans should be on the edge of their seats. We’ve got the scoop on all the looming drama. Let’s dive in and check out this great preview.

For starters, Nikki (Melody Thomas Scott) and Victor (Eric Braeden) will reevaluate their future. When Victor was near death in the hospital, Nikki was certainly broken up about it. However, the appearance of Victor’s (Eric Braeden) mistress cause a setback for their reunion. Nikki and Victor can both be pretty stubborn, but it looks like they’ll finally take a step in the right direction soon.

Arturo (Jason Canela) and Helen (Sitara Hewitt) will have to move on soon enough. Fortunately, Abby will around for Arturo to have some fun with. Meanwhile, the pressure will rise for Nikki, Victoria (Amelia Heinle), Sharon (Sharon Case) and Phyllis (Gina Tognoni). They’ll fear exposure as Paul (Doug Davidson), Nick (Joshua Morrow) and Victor (Eric Braeden) seek the truth.

The Young and the Restless spoilers say someone will indeed learn the big secret soon. A member of the cover-up alliance will break, but there’s no word yet on which one. Any of them are capable, especially since Y&R has some jaw-dropping twists on the way. This storyline is far from over, so sit back and enjoy all the shockers.

Of course, Dina (Marla Adams) also has a secret that’s set to blow. The Young and the Restless spoilers say Jack’s (Peter Bergman) paternity will be revealed during May sweeps. Unfortunately, it won’t be a situation where a loved one gently shares the news. Like Ashley (Eileen Davidson), Jack will be exposed as a non-Abbott in public. He’ll be crushed when he hears what his family’s been hiding.

Once Jack gets over the shock, he’ll sink to a dark place. Y&R viewers will see Jack lash out in unexpected and potentially evil ways! Billy (Jason Thompson) will have his hands full as he tries to help Jack and fend off Kyle (Michael Mealor). There’s going to be major conflict within the Abbott clan.

Back with Sharon and Nick, they’ll grow even closer. These two will try to fight their deep connection, but it sounds like that plan won’t last long. Over with Neil (Kristoff St. John) and Lily (Christel Khalil), they’ll work hard to keep Devon (Bryton James) and Hilary (Mishael Morgan) away from each other. You can bet they’ll hit some snags thanks to Hilary’s pregnancy.

Nevertheless, Y&R fans know Hilary can’t be trusted. After heartbreak hits, will everything be as it seems? Will any baby deception go down or will Hilary choose an honest approach this time? Either way, she should have Devon wrapped around her finger soon.

May sweeps will be full of secrets, bombshells and blooming love. We’ll give you updates as other details emerge. Stick with the CBS soap and don’t forget to check CDL often for the latest Young and the Restless spoilers, updates, and news.