BY Marcy Cohen on June 6, 2018 | Comments: one comment
Related : Soap Opera, Spoiler, Television, The Young and the Restless 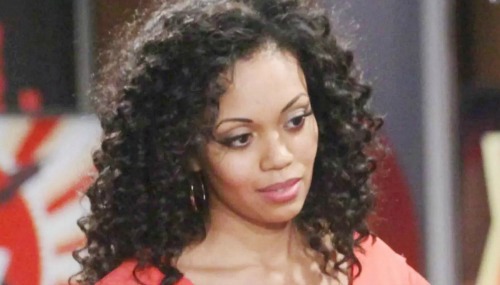 The Young and the Restless (Y&R) spoilers tease that a major exit could be looming. According to TV Source, there’s some strong buzz about Mishael Morgan’s departure as Hilary. Their sources claim that contract negotiations fell apart, so Morgan’s time on the CBS soap may be wrapping up.

Nothing’s been confirmed yet, but this lines up with some previous chatter. There had already been gossip on social media about an important cast member leaving a popular daytime drama. If Hilary’s the one who’s set to go, this has undoubtedly thrown Y&R for a loop.

Hilary’s a key player and she’s gearing up for a big storyline with Devon (Bryton James). They’re finally inching toward a reunion and they have a baby on the way. Of course, The Young and the Restless fans should’ve known Hilary wouldn’t find real happiness. That’s just not how things work in her world!

Some might call it karma for all of Hilary’s old schemes. Others might say it’s simply bad luck, which all soap characters tend to face from time to time. Whatever the case, Hilary’s life could soon be turned upside down. The Young and the Restless spoilers say Hilary will need an exit strategy if she’s indeed leaving. Word has it the show has a car crash in mind.

Hilary could be involved in a deadly accident. It’s easy to imagine her losing the baby as a result of her injuries. It’s even possible both Hilary and her unborn child will die. Whatever the case, Devon could have some difficult moments coming up. He may end up on an extremely dark path.

On the bright side, Morgan and James might get some great material for their Daytime Emmy reels. Hilary and Devon’s love story may have a tragic ending, but their portrayers will undoubtedly give this potential storyline their all. The Young and the Restless spoilers state that some gripping drama’s ahead, so stay tuned.

What do you think about Mishael Morgan’s possible exit? Will you miss Hilary if she’s out at Y&R? We’ll give you updates as other news emerges. Stick with CBS soap and don’t forget to check CDL often for the latest Young and the Restless spoilers, updates, and news.