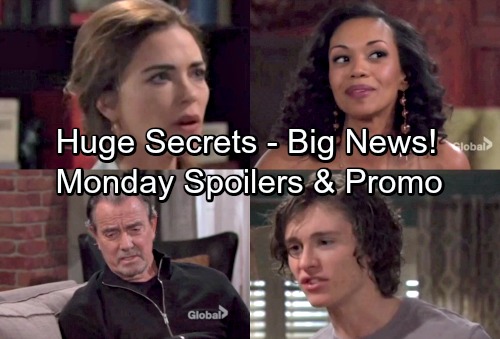 The Young and the Restless (Y&R) spoilers for Monday, April 23, tease that Nikki (Melody Thomas Scott) will comfort a guilt-ridden Victoria (Amelia Heinle). She’ll insist that her daughter’s not to blame for what happened with J.T. (Thad Luckinbell). Victoria will visit her therapist and open up about everything that went down in Hawaii. She’ll still feel responsible for Victor’s (Eric Braeden) attacks.

Meanwhile, Nikki will find Arturo (Jason Canela) and head upstairs for another sex session. When Victor’s (Eric Braeden) mistress comes up, Nikki will mention her own situation with Arturo. She’ll think he deserves more than revenge sex, but he won’t mind. Later, Nikki will spot Arturo and Abby (Melissa Ordway) sharing a flirty moment. The Young and the Restless spoilers say she may wonder what’s brewing.

At the ranch, Reed (Tristan Lake Leabu) will stop by to grill Victor. He’ll want more info on his dad, but Victor will try to distract him with chess. Reed will keep pushing, so Victor will finally admit a few details. He’ll talk about J.T.’s investigation and argue that it was the reason he reunited with Victoria. A furious Reed will fling the chess set and accuse Victor of lying.

After Nikki arrives and settles Reed down, he’ll return home to confront his mom. Victoria will contend that J.T. really wanted them all to be a family. However, she’ll point out there were serious issues. J.T. couldn’t handle his rage, so it all fell apart. Reed will suggest that maybe things will work out in the future, but Victoria will hint that J.T.’s not coming back. She’ll hold her son as he cries.

Across town, Hilary (Mishael Morgan) will try to speak with Devon (Bryton James) several times. He’ll keep shooing her away, so she’ll dump a positive pregnancy test in front of him and leave. Once Devon catches up with her, he’ll struggle to believe she’s actually having his baby. An annoyed Hilary will insist she wouldn’t trick him about something like this.

After Devon accepts that he’s going to be a father, he’ll seem glum about it. Hilary will argue that if Devon doesn’t want to be a dad, that’s fine by her. She’ll note that they can just list him as an anonymous donor and rip up the contract. Y&R spoilers say Devon will refuse to get on board with that plan. He’ll want to be involved in this kid’s life.

At the Abbott mansion, Abby will ask what Kyle’s (Michael Mealor) doing as he pockets the memory card. He’ll bring up Dina’s (Marla Adams) video interview and wonder when he can see the finished product. Kyle will argue that he wants to know more about his grandmother, but Abby will remain suspicious. She’ll note that the whole family can watch once the footage has been edited.

Back at the ranch, Kyle will pop in for a chat with Victor. He’ll seek a Newman position, but Victor will think a Jabot job will be more useful to them. That way Kyle can report back with valuable info. Speaking of valuable info, Kyle will mention that Dina’s keeping some big secret. Victor will mull it over and urge Kyle to forget that angle. He’ll think they need to stick to their long-term strategy.