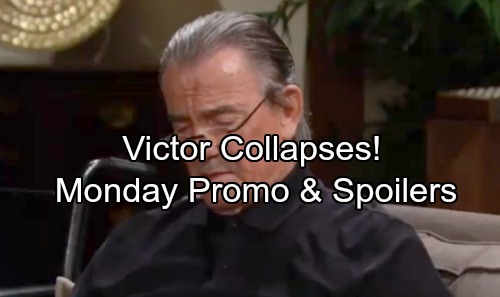 The Young and the Restless (Y&R) spoilers for Monday, April 30, tease that Sharon (Sharon Case) will continue to be on edge. Nick (Joshua Morrow) and Mariah (Camryn Grimes) will chat about how stressed she seems. They’ll worry and hope they can get Sharon to open up soon.

Later, Faith (Alyvia Alyn Lind) will come home with quite a story to tell. Nick and Sharon will learn their daughter got a one-day suspension from school. They’ll wonder what happened, so Faith will explain. She’ll insist she had to stand up to a boy who was bullying girls.

Afterward, Sharon will seem lost in thought about the cover-up. Nick and Mariah will take turns grilling her, but Sharon won’t give them the scoop. At the ranch, Victor (Eric Braeden) will work with a physiotherapist in the stables. Nikki (Melody Thomas Scott) and Neil (Kristoff St. John) will have concerns when they find him. They won’t think Victor should be rushing his recovery like this.

Victor will argue that he has to get back to normal and find J.T. After Nikki exits, Vic will fill Neil in on the abuse footage. He’ll also provide updates on his open marriage as Neil lends an ear. Victor’s workout will finally become too much for him. The Young and the Restless spoilers say he’ll suddenly collapse, so Neil will have to take action!

Meanwhile, Billy (Jason Thompson) will offer his gratitude to Phyllis (Gina Tognoni). He’ll think she’s been so kind about taking the kids more often. It’s eased the burden on Victoria, but Billy will still feel like his ex should talk about J.T. He’ll consider chatting with her, but Phyllis will advise against it.

At Crimson Lights, Phyllis will join Nick (Joshua Morrow) and Nikki. Y&R spoilers say Nick will share his fears about Sharon. He’ll note that she hasn’t been sleeping much and when she does, she has nightmares. Phyllis and Nikki will downplay Sharon’s issues before Nick takes off. Once they’re alone, they’ll agree they have to get a grip on Sharon or they’ll all end up behind bars.

Hilary will come around the corner and assume J.T.’s the topic of conversation. They’ll discuss the fact that he’s still missing. Nikki will head out, so that’ll leave Hilary to make a confession. She’ll tell Phyllis that she’s not pregnant after all.

However, the wheels will soon start turning. Hilary will remember that she still has Devon’s (Bryton James) sperm sample. She’ll hope to use it and keep him in the dark on what really happened. We’ll keep you posted as other Young and the Restless news comes in. Stick with Y&R and don’t forget to check CDL often for the latest Young and the Restless spoilers, updates, and news.