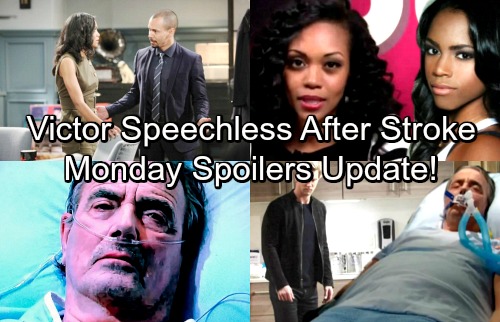 The Young and the Restless (Y&R) spoilers update for Monday, April 9, tease that J.T. (Thad Luckinbell) will once again leave Victor (Eric Braeden) to die. As Victor flatlines, J.T. will walk out of his room and hop on the elevator. The hospital staff will realize Victor’s in distress, so they’ll rush in to help. They’ll save him with CPR, so the great Victor Newman will stick around for his family.

Elsewhere, J.T. will track down Victoria (Amelia Heinle) and suggest that he’s feeling a bit ill. The Young and the Restless spoilers say she’ll take him home and offer some tea. While J.T. rests, Victoria will have a chat with Reed (Tristan Lake Leabu). He’ll let her know how school’s going and admit it’s been nice to have J.T. around.

J.T. will eventually appear and wonder if there’s been any news on Victor’s condition. Victoria won’t have any updates, so J.T. will change the topic to their engagement. He’ll think it’s time to bring Reed in the loop.

At Crimson Lights, Reed will hear about their wedding plans. He’ll give his approval before Victoria meets up with Sharon (Sharon Case). Y&R spoilers say Victoria will express her gratitude for the counseling idea. She’ll note that it’s been quite beneficial.

When Victoria points out that she doesn’t have any gal pals, Sharon will want to help. She’ll suggest throwing a girls’ gathering sometime. Nick (Joshua Morrow) will also stop by the coffeehouse on Monday. He’ll be sorry about lashing out at Sharon, but she’ll promise that they’re good.

Sharon and Nick will plan on having dinner later, but Phyllis (Gina Tognoni) will quickly derail their plans. She’ll push Nick to come home with her for a video chat with Summer. Afterward, Nick will stick around to visit for a while. Billy (Jason Thompson) will be annoyed over the third wheel, but Phyllis will persuade him to suck it up.

Suddenly, Sharon will show up in a panic. She’ll reveal that Nikki’s been trying to reach Nick, so he’ll head to the hospital. The Young and the Restless spoilers say Phyllis and Sharon will bicker about what’s best for Nick right now. Sharon will think her support is ideal, but Phyllis will contend that Nick’s night with her helped far more.

Once Nick meets up with Nikki and the rest of the Newman gang, they’ll discuss Victor’s latest ordeal. Nikki will point out that someone turned off his life support machine deliberately. The family will guess it was the same person who made the first attempt on Victor’s life. This certainly makes Jack (Peter Bergman) look less guilty. The Newmans will hope to look at some security footage ASAP.

Victor will be awake in his room, but a small stroke will leave him unable to speak – or identify his attempted murder. However, Vic will do what he can by giving J.T. a cold stare. Across town, Devon (Bryton James) will back out of the baby deal. After all the Simone (Shanica Knowles) drama, Devon just won’t think he can trust Hilary (Mishael Morgan) enough to raise a kid with her.

Devon will suggest that if Hilary isn’t pregnant already, their agreement is done. Does Hilary have a bun in the oven or could she be forced to get creative? We’ll keep you posted as other Y&R details emerge. Stick with the CBS soap and don’t forget to check CDL often for the latest Young and the Restless spoilers, updates and news.