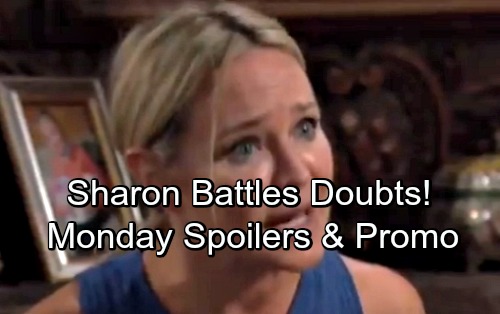 The Young and the Restless (Y&R) spoilers for Monday, August 6, tease that Sharon (Sharon Case) will open up to Mariah (Camryn Grimes). She’ll admit she’s missing the old Nick (Joshua Morrow) a bit. Mariah will suggest that sometimes change is good and try to lift Sharon’s spirits. In the end, Sharon will admit that happiness is all she really wants. She’ll eventually ask for Mariah’s help with wedding plans.

Later, Kyle (Michael Mealor) will meet up with Mariah and express sympathy about Hilary (Mishael Morgan). He’ll also wonder how things are going with Tessa (Cait Fairbanks). Mariah will simply reply that Tessa had to take a trip. She’ll deny a nosy Kyle any more details than that.

At the athletic club, Mariah will get a surprising phone call. Tessa will reach out and claim she just needs a few more days to get Crystal (Morgan Obenreder) settled. The call will take a disturbing turn when Tessa yells at someone nearby. She’ll shout at this person to leave her alone before the call gets disconnected.

Mariah will definitely worry about the trouble Tessa’s in. While she mulls over her next move, Summer (Hunter King) will flaunt her body to Billy (Jason Thompson). She’ll saunter around the apartment in a towel and wonder what Billy really sees in Phyllis (Gina Tognoni).

When Phyllis appears, she’ll grill Billy about his secret project. The Young and the Restless spoilers say Bill will offer reassurance. He’ll insist it’s coming together, so Phyllis will get the scoop soon. Over with Cane (Daniel Goddard), he’ll push Lily (Christel Khalil) to keep her head on straight. Cane won’t want Lily going to the cops without a real discussion about it.

At Hamilton-Winters, Cane will try to get through to Devon (Bryton James). He won’t think Devon should destroy Lily’s life because Hilary and the baby are gone. Devon will remain adamant that Lily should pay for her actions. Once Nate (Brooks Darnell) finds them clashing, he’ll urge Devon to reconsider. Cane won’t let this go, so Devon will have a real fight on his hands if he keeps this up.

At Newman Enterprises, Phyllis will bicker with Nikki (Melody Thomas Scott) until Victor (Eric Braeden) interrupts. After Phyllis departs, Nikki will express concern about Vic and Nick’s war. Of course, Victor won’t think it’s anything to worry about. He won’t think Nick’s even close to a formidable foe.

Next, Nate will show up for a meeting. Y&R spoilers say Victor will introduce the doc to Nikki and fill her in on the plan. Nate will be taking care of all their medical needs from now on. Back with Devon, he’ll find Cane warning Shauna (Camryn Hamm) to stay quiet. That’ll lead to another fierce shouting match. It’ll end with a door being slammed in Cane’s face, so he isn’t making any progress.

At Jabot, Kyle will notice Summer making moves on Billy. He’ll suggest that if Summer succeeds in getting anything started, it’ll only be some tawdry hookup. However, that’s what Summer seems to enjoy! She’ll stick to her goal and hope she gets what she wants.

Finally, Kyle will get caught snooping through Billy’s files. After dealing with Billy’s backlash, Kyle will text Ashley (Eileen Davidson) and urge her to come home right away. It sounds like Kyle will be nervous about what Billy’s cooking up.