BY Heather Hughes on December 5, 2018 | Comments: one comment
Related : Soap Opera, Spoiler, Television, The Young and the Restless 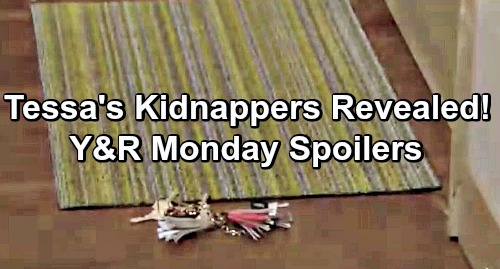 The Young and the Restless (Y&R) spoilers for Monday, December 10, tease that Mariah (Camryn Grimes) will grow concerned. After texting Tessa (Cait Fairbanks) to meet in Friday’s episode, Mariah will get stuck waiting on Monday. She’ll probably send a few more texts wondering what’s up, but Tessa will be busy dealing with a nightmare.

Mariah may eventually head back to the apartment and find Tessa’s dropped keys. That should be a clue that something’s terribly wrong. Friday’s episode brought the decision to break up with Tessa, but this incident just might change Mariah’s mind. There’s nothing like the fear of losing someone to make you have a greater appreciation.

Even if Mariah sticks to her guns for now, she’s not going to be happy about the cover-up crew’s actions. It turns out three members are behind Friday’s kidnapping, which means an interrogation should be on the way Monday. Y&R fans can expect some intense scenes featuring Tessa and the girls’ night gang.

The Young and the Restless spoilers say Tessa will be terrified until the bag from her head’s removed. Nikki (Melody Thomas Scott), Sharon (Sharon Case) and Victoria (Amelia Heinle) will be looking back at her. They’ll try to keep Tessa rattled enough to come clean about what she knows.

Surprisingly, Phyllis (Gina Tognoni) won’t be involved – at least not in the abduction part. This kind of thing seems right up her alley, but there was probably just no time to bring her in the loop. Phyllis absolutely would’ve been on board otherwise. She may join in as they gang up on Tessa this Monday.

Tessa will assure the ladies that she had nothing to do with the fire, the planted gun or J.T.’s (Thad Luckinbill) bloody shirt. How would she have gotten her hands on J.T.’s blood anyway? She never even met the guy!

Nevertheless, the cover-up crew may worry that Tessa spilled something she shouldn’t. They may think she blabbed to a Newman enemy. Tessa will beg them to believe Mariah is the only person she told and that was just because it was forced out of her. She has no interest in making any more trouble for herself.

Fortunately, there’ll soon be proof that Tessa isn’t behind the threat. J.T.’s old clothes will appear in Nikki’s bed and it seems they’ll be planted while Tessa’s held hostage. Victoria, Sharon, Nikki and Phyllis will have to consider other options.