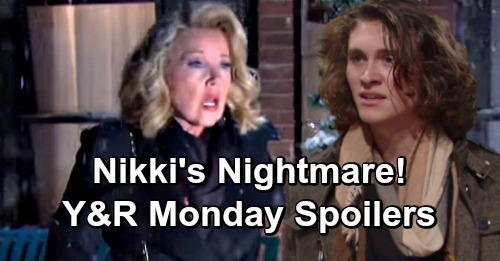 The Young and the Restless (Y&R) spoilers for Monday, December 17, tease that several terrible choices will collide into one giant mess. The trouble will start when Charlie (Noah Alexander Gerry) indulges in too much alcohol. It looks like a holiday party might get a bit out of hand.

Charlie won’t be able to drive safely, so Reed (Tristan Lake Leabu) will offer to get behind the wheel instead. Despite Reed’s efforts to salvage the night with some maturity, a shocking accident is still on the way. That’s because Nikki (Melody Thomas Scott) will be busy making poor decisions, too.

Y&R spoilers say Nikki will crumble under the weight of everything she’s dealing with. Victor (Eric Braeden) is missing, the stables have burned down, evidence has been planted, Rey (Jordi Vilasuso) is closing in, Reed wants revenge…it’s all just too much! No one should be surprised that Nikki’s hitting the bottle again as a coping mechanism.

After a rough day of dealing with Rey, Nikki will sneak a few more drinks and wobble outside. She’ll lose her footing in the snow and find herself lurching into the road. Unfortunately, Reed will speed through at exactly the wrong moment. He’ll end up smashing right into his wasted and confused grandmother.

Reed and Charlie will notice they hit something, but they’ll assume it was just trash can. The guys will keep chugging along while Nikki’s left unconscious and injured. Of course, bad news travels fast in Genoa City. It won’t be long until Nikki’s found and hurried to the hospital, so phone calls to her family will be made.

The Young and the Restless spoilers say Nick (Joshua Morrow) will be in panic mode early this week. He’ll get some crushing updates, so it sounds like he’ll find out his mom’s life is on the line. Nick will do his best to be his family’s rock during this crisis. Without Victor (Eric Braeden) around, Nick will feel the need to step up. He’ll try to keep hope alive as they all wait for word on Nikki’s condition.