BY Heather Hughes on December 14, 2018 | Comments: one comment
Related : Soap Opera, Spoiler, Television, The Young and the Restless 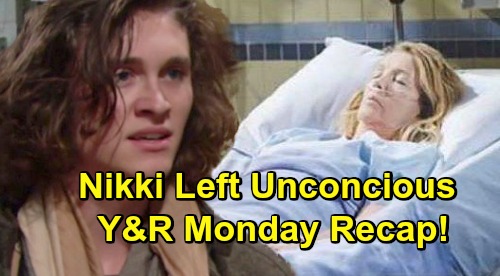 The Young and the Restless (Y&R) spoilers update and recap for Monday, December 17, tease that Rey (Jordi Vilasuso) will summon Nikki (Melody Thomas Scott) for a lecture. At the police station, Rey will rant about how Nikki committed a serious crime. He’ll scold her for trying to manipulate the investigation through Mia (Noemi Gonzalez), but Nikki will refuse to say anything without her lawyer present.

Once Michael (Christian LeBlanc) arrives, Nikki will suggest that she just cares about her husband and the same goes for Mia. She’ll think they’re on the same page about that. Rey will gripe about Victor (Eric Braeden) not returning home yet, but Nikki will downplay his absence. In a moment alone with Michael, Nikki will admit that she hasn’t been able to contact Victor lately.

Michael will insist that Nikki needs to steer clear of Mia, but he won’t want her to be alone tonight. He’ll drag her along to the Jabot Christmas party, which will turn out to be a terrible decision. Meanwhile, Y&R spoilers say Jack (Peter Bergman) will realize Billy’s (Jason Thompson) down in the dumps. He’ll turn to Victoria (Amelia Heinle) for help with lifting his brother’s spirits.

Victoria will ask Billy to take her to the Jabot bash. She’ll suggest that a party sounds fun, so Billy will get on board. When Rey returns home, he’ll reveal that he was grilling Nikki earlier. Mia won’t approve, but she’ll shift gears and talk a reluctant Rey into attending the Jabot shindig with her.

Across town, Charlie (Noah Alexander Gerry) will battle heartbreak. He’ll tell Reed (Tristan Lake Leabu) that Shauna (Camryn Hamm) dumped him, so he’s been tossing back beers. Charlie will still want to catch a party, but Reed won’t think it’s safe for him to drive. Even though Reed’s license is suspended, he’ll believe it’d be best if he got behind the wheel instead.

Meanwhile, the Jabot holiday gathering will get underway. Lola (Sasha Calle) will gush to Kyle (Michael Mealor) about all the great things happening in her life. She’ll spot Fen (Zach Tinker) and express gratitude for his help with Devon’s (Bryton James) dinner the other night. Kyle will take jabs at Fen, but that won’t go over well with Lola. She’ll want the boys to play nice, but that’s sure to be tough!

Michael will also give Fen a hard time about being a waiter, but Lauren will push him to support their son. As for Nikki, she’ll be busy sneaking drinks all night. Nikki will also vent to Nick (Joshua Morrow) and Victoria about how Mia just had to blab to Rey. She’ll hit the roof when she sees Rey and Mia waltz in the party together.

Michael will chew Rey out for coming and warn him to steer clear of Nikki. However, that won’t stop Rey from cornering Nikki in the hallway. He’ll vow to take Victor down and nail her for being his accomplice. The Young and the Restless spoilers say Nikki will have much bigger problems soon enough.

After the confrontation, Nikki will down more alcohol before heading home in the snowstorm. As Nikki stumbles outside, Reed will struggle to see through all the falling flakes on the windshield. He’ll crash right into Nikki and keep going as he ponders if he hit something. Poor Nikki will be knocked out cold in the snow!

Back inside, Lauren and Fen will put on quite a show for the party guests. They’ll do some singing on stage, so some fun will balance out Nikki’s grim evening. We’ll give you updates as other Young and the Restless news comes in. Stay tuned to Y&R and don’t forget to check CDL often for the latest Young and the Restless spoilers, updates and news.