BY Sean O'Brien on December 14, 2018 | Comments: one comment
Related : Soap Opera, Spoiler, Television, The Young and the Restless 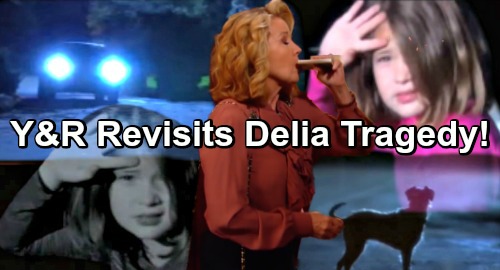 Evoking the name of Delia and Adam within the same lead sentence could also be seen as a tease that Y&R is about to revive the character Justin Hartley last played. Well, yes, that could happen, or at least, many hardcore soap fans are still hoping.

As for Reed, his return to Genoa City, just prior to Christmas, quickly proves dramatic. The young man’s intent was to be with his mom and his siblings at this important time of the year. So he completed finals early and jetted home. But instead of a warm family reunion, Reed learns that Victor (Eric Braeden) is suspected of killing his father. Then, soapy circumstances follow.

Cane (Daniel Goddard) remains leery of Reed. The ill-fated and nearly fatal fire at The Underground two Halloween’s ago was more than an eye-opener. It was a couple’s game-changer, with Mattie (Lexie Stevenson) realizing that Reed needed to mature.

It is rather interesting that TPTB at Y&R would opt to replay a somewhat similar scenario in having a character be run down by a car. That plot point was obviously used before Delia was tragically killed, as Paul (Doug Davidson) and Christine (Lauralee Bell) were memorably hit, on purpose, by Phyllis (as then played by Michelle Stafford), and various others personas faced generally similar fates. But it’s use in this instance feels a bit contrived.

Reed’s act allows him to swap spots with Nikki, who he doesn’t yet know is J.T.’s actual, though accidental, murderer. While Nikki didn’t intend to kill Reed’s father, her impulse action did take Luckinbill’s character’s life. Now she’s the victim, which will provoke Victor’s return by Christmas Eve.

Meed’s closure eventually resulted in an off-camera, online meeting of young minds. Both very likable characters then met in Lane’s kitchen and hoped to revive their relationship. Cane balks, but has a nice sit-down with Vickie and seems to warm to his daughter’s thoughts. Then, a short time later, Reed proves Cane’s instincts right.

Another delay tactic used to punt the climax to the overall J.T. arc? Maybe. But Leabu’s return indicates that a wrap to this dominant storyline will soon be at hand. CDL is a leading source for everything linked to The Young and the Restless. Check back regularly for Y&R spoilers and news!