BY Kinsley Goldman on December 14, 2018 | Comments: one comment
Related : Soap Opera, Spoiler, Television, The Young and the Restless 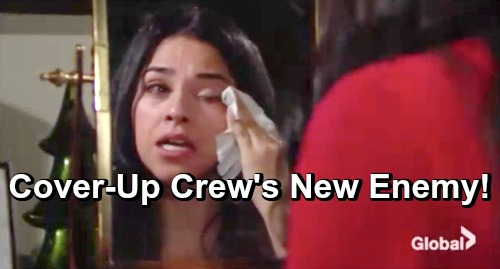 The Young and the Restless (Y&R) spoilers reveal that Nikki (Melody Thomas Scott) may have made a huge mistake. She did her best to get chummy with Mia (Noemi Gonzalez), but she had an ulterior motive. Nikki wants Rey (Jordi Vilasuso) to back off Victor (Eric Braeden), so she was hoping Mia could help out with that.

Unfortunately, Rey finds out and blows his top in Friday’s episode, December 14. Since Mia wants to repair her marriage, she may end up turning against Nikki instead. Mia could easily become a threat that the cover-up crew never saw coming, especially since Sharon’s (Sharon Case) involved here.

From the moment Mia debuted on Y&R, she’s made Sharon her enemy. Mia may plaster on a smile during some of their interactions, but there’s jealousy and fear behind it. She can tell that Rey and Sharon still have a strong connection.

As Rey struggles to let go of that, The Young and the Restless spoilers say Mia could grow increasingly nervous. She already had enough relationship issues before Sharon came along. The last thing Mia needs is competition right now. What better way to eliminate her rival than to have her thrown behind bars? That could be an option if Mia digs around and learns the deadly posse’s secret.

Mia could easily fish for more info from Rey and start gathering some facts. She could play Nikki as well and try to work that angle. The J.T. (Thad Luckinbill) puzzle pieces could slowly come together for Mia. She could determine that Nikki, Sharon, Victoria (Amelia Heinle) and Phyllis (Gina Tognoni) all have something to hide.

Mia is a total schemer, so it’s easy to imagine her plotting against them. She could eavesdrop or even plant a bug somewhere to secure proof against the girls’ night gang. Sharon’s been lying to Rey’s face right across from him at the GCPD, so Mia may think he’d like to hear about that.

Perhaps Mia would want to be the hero who helps Rey solve the case that’s consuming him. She’s been complaining about how much he works, so this could certainly take one thing off his plate. If not, Mia could at least use her potential evidence as leverage. She could force Sharon to cut all contact with Rey or risk going to prison with her partners in crime.