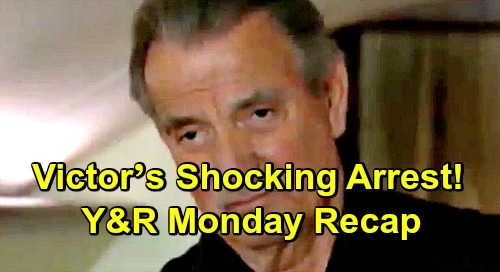 The Young and the Restless (Y&R) spoilers update and recap for Monday, December 31, tease that Devon Hamilton (Bryton James) will kick off a New Year’s Eve bash. He’ll be grateful for Ana Hamilton’s (Loren Lott) help decorating, but he’ll also get some frustrating news.

Ana will insist that the songwriter Devon wants to sign isn’t interested in meeting. Of course, Y&R fans know Ana happens to be that stubborn songwriter!

Fenmore “Fen” Baldwin (Zach Tinker) will show up and praise Ana’s New Year’s Eve look. Abby Newman (Melissa Ordway) and Arturo Rosales (Jason Canela) will also be on hand to celebrate. Lola Rosales (Sasha Calle) will join the crowd as well and spread the word about her breakup.

That’ll give Ana and Abby an idea. They’ll decide to invite Kyle Abbott (Michael Mealor) in hopes that he can fix this.

Unfortunately, Lola will just end up getting irritated with Kyle. She’ll kiss Fen at midnight, so that move will be at least partially motivated by payback. Cane Ashby (Daniel Goddard) won’t finish 2018 on a high note either.

Despite Devon’s attempts to offer support, Cane will be torn up about Lily Ashby’s (Christel Khalil) situation. He’ll drink until he ultimately conks out on Devon’s sofa.

Other Young and the Restless spoilers say Nick Newman (Joshua Morrow) and Dr. Nate Hastings (Brooks Darnell) will face danger. Victor Newman’s (Eric Braeden) minions don’t mess around! If they’re given a job to do, they do it. They know there’ll be a steep price to pay if they let someone get in the way.

That’s why the ambulance driver, George, will threaten Nick with a gun. He’ll refuse to let Nick call Victoria Newman (Amelia Heinle) and fill her in on their whereabouts. Nick will recognize the private airstrip Victor’s used in the past.

After Victor contacts George, Nikki Newman (Melody Thomas Scott) will be taken inside. That’ll lead to an intense showdown between Nick and his father.

Victor will defend his plan, but Nick will feel like his dad’s putting Nikki’s life on the line. They’ll argue, but Victor will want Nick to just say goodbye. He’ll expect to be off the grid with Nikki for a while.

Once Nikki wakes up, she’ll reassure Nick that this is for the best. Victor will convince Nate to tag along, so Nick will surrender. He’ll just want Victor to take good care of Nikki until their family’s reunited.

As Victor and Nikki prepare for their flight, Victoria will freak over Nick’s dropped call. She’ll be imagining all sorts of horrible things, but Phyllis Summers (Gina Tognoni) won’t want to panic yet.

They’ll decide they don’t want to be alone tonight, so they’ll open up a bottle of bubbly and discuss Billy Abbott (Jason Thompson).

Phyllis will be curious about the nature of Billy and Victoria’s relationship. She’ll wonder if they’re friends with benefits, but Victoria will think Phyllis’ inquisitiveness is telling. Talk will turn to Phyllis’ reunion with Nick.

Victoria will admit she struggles to go backward in love. After everything that happened with J.T. Hellstrom (Thad Luckinbill), Victoria has become wary of former flames.

Later, Phyllis will exit as Reed Hellstrom (Tristan Lake Leabu) returns home. Victoria will give her son updates on Nikki’s disappearance. When she suggests the person behind the hit-and-run may have done this, Reed will make a confession. He’ll reveal that Victoria’s wrong since he was the driver.

Over with Mia Rosales (Noemi Gonzales), she’ll be thrilled when Rey Rosales (Jordi Vilasuso) dotes on her. Rey will insist that they’re going to have the whole evening to themselves. Unfortunately, work will get in the way.

Once Rey’s team tracks Nick’s last phone call, he’ll receive a text about it. Mia will understand that duty calls, but she’ll look glum as she watches TV alone later.

Back at the airstrip, the cops will roll in and halt Victor’s takeoff with Nikki. The Young and the Restless spoilers say Rey will hop on the plane and make a startling arrest! Victor will be taken into custody, so this storyline is really heating up.

We’ll keep you posted as other Y&R details emerge. Stick with the CBS soap and don’t forget to check CDL often for the latest Young and the Restless spoilers, updates and news.