The Young and the Restless Spoilers: Week of December 31 – Betrayal Bombshells, Tight Spots and Stunning Confessions 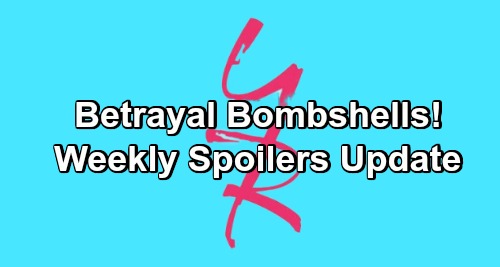 The Young and the Restless (Y&R) spoilers for the week of December 31-January 4 tease that several Genoa City residents will face drama. First, Cane Ashby (Daniel Goddard) will head to Devon Hamilton’s (Bryton James) New Year’s Eve party after a disastrous visit with Lily Ashby (Christel Khalil). Things will get even worse after Cane drinks himself into a stupor and passes out on the couch.

Cane will eventually sleep it off, but his poor choices will continue. The Young and the Restless spoilers say Cane will find himself drawn to Victoria Newman (Amelia Heinle) after an explosive fight. Reed Hellstrom’s (Tristan Lake Leabu) confession and Charlie Ashby’s (Noah Alexander Gerry) involvement will lead to some stunning moments.

Sparks will fly when Victoria and Cane least expect it, so be prepared for a steamy kiss. Cane will battle guilt after their hot encounter, especially since Lily’s stuck struggling behind bars. She’s the one who’s suffering the most, but Cane’s the one who’s spiraling out of control. Thankfully, Jill Atkinson (Jess Walton) will be back this week to offer support.

Billy Abbott (Jason Thompson) will also get some advice from Jill this week. They’ll share a deep conversation as Billy reflects on the changes in his life. Meanwhile, Mariah Copeland (Camryn Grimes) will find herself in a tight spot.

As the host of GC Buzz, it’s Mariah’s job to tell viewers what’s buzzing in GC. Of course, that means reporting on the J.T. Hellstrom (Thad Luckinbill) murder investigation.

That’s a problem since Mariah knows how J.T. died and wants to protect the cover-up crew. The Young and the Restless spoilers say Mariah will fake curiosity as she grills Rey Rosales (Jordi Vilasuso).

She’ll probably try to keep their discussion focused on Nikki Newman (Melody Thomas Scott) instead of what happened to J.T. By the time this interview’s over, Mariah should breathe a huge sigh of relief.

However, Mariah will tackle another crisis at some point. Abby Abbott (Melissa Ordway) will find reason to lash out at Mariah, so maybe this will be about Lola Rosales (Sasha Calle) and Kyle Abbott’s (Michael Mealor) split. It’s easy to imagine Abby backing up her new chef while Mariah defends Kyle.

Bottom line, Kyle didn’t give Lola that expensive handbag to show off or make her feel poor. He just wanted to give Lola something nice. What’s so wrong about that? Mariah will know Kyle’s heart was in the right place.

Besides, Lola and Kyle need to graduate to some real issues! After everything Mariah’s been through with Tessa Porter (Cait Fairbanks), she may think this handbag nonsense is ridiculous.

Y&R fans will also see Nikki will take charge of a situation. Will she plan to come clean and put an end to the J.T. nightmare? The Young and the Restless spoilers hint that Nikki will consider it, but a change of plans is on the way.

It sounds like some great twists and turns are ahead. We’ll give you updates as other Y&R news comes in. Stay tuned to the CBS soap and don’t forget to check CDL often for the latest Young and the Restless spoilers, updates, and news.