The Young and the Restless Spoilers: Friday, July 13 Update and Sneak Peek – J.T. and Victor Face to Face In Deadly Showdown

BY Heather Hughes on July 12, 2018 | Comments: one comment
Related : Soap Opera, Spoiler, Television, The Young and the Restless 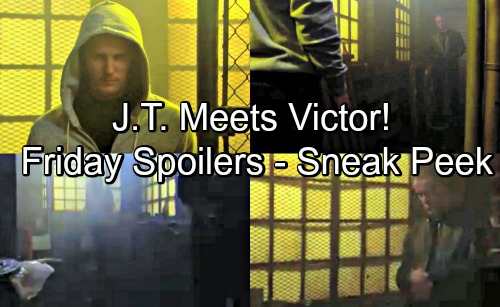 The Young and the Restless (Y&R) spoilers for Friday, July 13, tease that Jill (Jess Walton) will return for a meltdown. She’ll rip into Jack (Peter Bergman) over the Phillip (Donnelly Rhodes) situation and insist that he needs to let this go. Jill will also blast Kyle (Michael Mealor), who’ll offer an apology for his actions. Of course, Jill won’t believe Kyle’s sorry for gravedigging and stirring up all her grief again.

After Kyle exits, Jack will try to get through to Jill. He’ll want her to understand how much he needs bio dad answers. Once Jill softens a bit, they’ll decide to grab drinks at the athletic club. While they’re there, Nikki (Melody Thomas Scott) will bump into Jill and rant about the artwork in the park. They’ll also discuss the possibility that Phillip was Jack’s father.

Nikki will suggest that if it’s true and Katherine (Jeanne Cooper) had known, her will would’ve been very different. She’ll think Chancellor Industries would’ve ended up Jack’s hands, but Jill will dismiss that idea. Later, Jill will be at the Abbott house when the DNA results come in. She’ll continue to freak as the moment of truth arrives.

In the meantime, Victoria (Amelia Heinle) will fear for her father. She’ll find out Victor (Eric Braeden) intends on facing off with J.T. (Thad Luckinbill). Victoria will worry that this war will have a deadly outcome. She’ll ask if Victor intends to kill J.T., but he’ll avoid answering.

Naturally, Victoria will try to talk Victor out of this meeting. She’ll point out that J.T. could get the upper hand and truly murder him this time. The Young and the Restless spoilers say Victor will stand his ground and dash off, so Nikki will be in panic mode. She’ll call Nick (Joshua Morrow), who’ll get in touch with Paul (Doug Davidson). Nikki will hope the cops can offer some protection soon.

Elsewhere, someone wearing a glove will pull a gun out of a safe. A little later, Victor will await J.T.’s arrival in an alley. The Young and the Restless spoilers say J.T. will eventually emerge for the showdown. A smug and vengeful Victor will declare that he’s been waiting.

At Hamilton-Winters, Devon (Bryton James) will invite Nate (Brooks Darnell) over for a chat. Hilary (Mishael Morgan) will be irked about having to see him everywhere. She’ll want rid of the doc, but Devon will explain that Nate’s there for a recording session.

When the server acquisition comes up, Devon will express concern. That contract worked out well for the company, but he won’t like they used an insider tip. Lily (Christel Khalil) won’t think it’s a big deal since Victor (Eric Braeden) would’ve done the same thing. Nate will back Lily up, but Hilary will remain firmly in Devon’s corner.

Y&R spoilers say Hilary and Lily will get into a heated argument. Fortunately, Devon will shut it down and urge everyone to chill out. After getting a message from Kyle, Mariah (Camryn Grimes) and Tessa (Cait Fairbanks) will arrive on the rooftop. He’ll explain that he fibbed about a robbery to get them there.

Kyle will insist that Tessa and Mariah are going to enjoy a movie under the stars. It’ll be a date setup, but they won’t mind too much. In fact, this could be the start of something romantic. We’ll give you updates as other Y&R news comes in. Stick with the CBS soap and don’t forget to check CDL often for the latest Young and the Restless spoilers, updates, and news.

It’s the moment you’ve been waiting for! Here’s a sneak peek at tomorrow’s Friday the 13th showdown between Victor and J.T. #YR pic.twitter.com/8ZMKqMX0en