BY Heather Hughes on February 9, 2018 | Comments: one comment
Related : Soap Opera, Spoiler, Television, The Young and the Restless 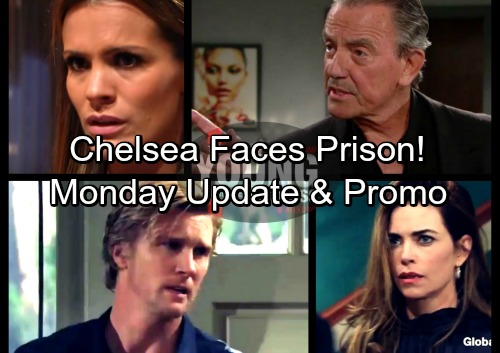 The Young and the Restless (Y&R) spoilers for Monday, February 12, tease that Victor (Eric Braeden) will drop a bomb on Chelsea (Melissa Claire Egan). He’ll reveal that he knows all about Alexandra West and what she’s been doing. Chelsea will try to talk her way out of trouble, but Victor will urge her to save it. He’ll vow to have Chelsea thrown behind bars if she continues her scams.

Meanwhile, Nick (Joshua Morrow) will frustrate Phyllis (Gina Tognoni). They won’t find anything in Adam’s (Justin Hartley) columbarium slot, so Nick will think that means Chelsea’s innocent. However, Nick will still want to have a chat with Chelsea later. He’ll push her for some honesty this time.

When confronted about the texts, Chelsea will fib about them being from a livid retailer. She’ll also admit she went to the crypt, but she’ll lie about the reason. Chelsea will claim she just wanted to understand why Adam (Justin Hartley) left behind all that cash. She’ll be willing to tell Nick anything else he wants to know, but he’ll assure her that they’re good.

At Jabot, Jack (Peter Bergman) will tell Phyllis (Gina Tognoni) and Lauren (Tracey E. Bregman) about the woman he hired replace Ashley (Eileen Davidson). Gloria (Judith Chapman) will hear the news as well. Jack apparently paid a pretty penny for Ash’s replacement, but Gloria will think she’ll be worth it.

Other Young and the Restless spoilers say J.T. (Thad Luckinbell) will stop by to see Traci (Beth Maitland). They’ll remember Colleen on her birthday. After Traci steps away for a moment, J.T. will take Victoria’s call.

Once she finds out where he is, Victoria will want J.T. to get the scoop on Ashley’s goals. J.T. will angrily remind Victoria of what day it is. He won’t think it’s appropriate to grill Traci as she reflects on her loss. J.T. will hang up the phone and wrap up his chat with Traci. They’ll share a hug before he takes off.

Later, Victoria (Amelia Heinle) will confront J.T. about his earlier outburst. He’ll think she’s turning this into something bigger than it has to be. Victoria will keep pushing, so they’ll have a full-blown fight. They’ll snap at each other over old wounds before J.T. makes a harsh suggestion.

J.T. will wonder if he’s just Victoria’s rebound. He’ll mention Billy (Jason Thompson) and they’ll continue debating. Once things settle down, Y&R spoilers say they’ll share a warm embrace. Victoria and J.T. will hope that they can get through all their problems. They really want a future together.

Elsewhere, Victor will give Lauren a briefcase containing the money Chelsea stole. He’ll suggest that he did some digging and got it back for her. Victor will let Lauren have it as long as she keeps her questions to herself. He’ll assure her that the culprit won’t be pulling this stunt again.

Finally, Phyllis will make a bold declaration. She’ll tell Lauren that Chelsea’s lies affect more than just business. Nick’s happiness is at stake, too. The Young and the Restless spoilers say Phyllis will vow to expose Chelsea and convince Nick to dump her.

It looks like a hot episode’s coming up. We’ll give you updates as other Y&R details emerge. Stay tuned to the CBS soap and don’t forget to check CDL often for the latest Young and the Restless spoilers, updates and news.