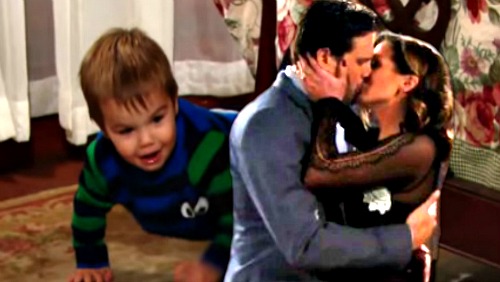 The Young and the Restless (Y&R) spoilers tease that Chelsea (Melissa Claire Egan) won’t let herself get too rattled by Victor (Eric Braeden). She’ll feel like she can handle his warnings. After all, Victor’s in this as deep as Chelsea is. They both made the decision to keep Christian’s (Jude and Ozzy McGuigen) paternity under wraps.

Chelsea knows that Victor tends to be on a power trip, so she’ll brush off his threat and focus on a worse one. Phyllis (Gina Tognoni) poses a much greater risk to Chelsea’s happiness right now. Y&R fans know that Phyllis is relentless. She doesn’t stop until she gets what she wants.

It turns out Phyllis is good at playing Nancy Drew as well. She knows Chelsea must’ve stolen the money from Chelsea 2.0, but she still needs proof. Nick’s (Joshua Morrow) been inching toward Phyllis’ side lately, but that won’t last long. Chelsea’s about to make a bold move that changes the game.

The Young and the Restless spoilers say Chelsea will take a step back and look at her wonderful life with Nick. She never thought she’d find love and joy again after Adam (Justin Hartley) died. Nick took Chelsea by surprise and gave her a new beginning.

As Chelsea watches Nick play with Christian and Connor (Gunner and Ryder Gadbois), she’ll have an overwhelming desire to keep their family unit intact. Y&R spoilers state that Chelsea will impulsively propose and Nick will quickly get on board. He’ll be too blinded by love to let his suspicions get in the way.

Nick and Chelsea may start planning their nuptials right away. If they’re going to have a wedding, it’ll have to be soon. Melissa Claire Egan’s time on The Young and the Restless is winding down. Before Chelsea departs, Anita (Catherine Bach) will return to Genoa City. It sounds like she might be back for some potential wedding chaos.

Kevin (Greg Rikaart) is also headed back to the show on February 20, so it’s possible he’ll attend, too. Of course, the guest list isn’t what’s important here. The point is a wedding always brings hot drama! Chelsea’s dark secrets could be exposed just before she ties the knot.

Christian’s paternity revelation may be included in the exit mayhem. You never know how much Phyllis might be able to dig up! We’ll give you updates as other Y&R news comes in. Stay tuned to the CBS soap and don’t forget to check CDL often for the latest Young and the Restless spoilers, updates and news.