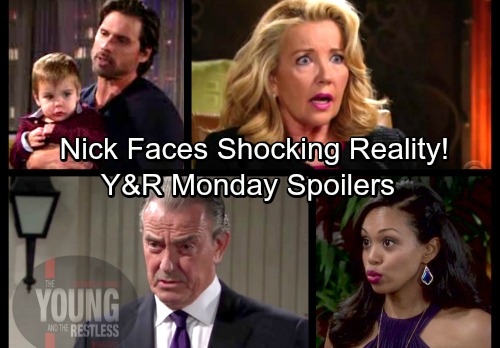 The Young and the Restless (Y&R) spoilers for Monday, February 26, tease that Victor (Eric Braeden) will make phone calls and deliver orders. He’ll be determined to track Chelsea (Melissa Claire Egan) down and stop her from taking Connor (Gunner and Ryder Gadbois) away from his family. Victor will definitely be furious about Chelsea’s desperate move.

Nikki (Melody Thomas Scott) will at least be pleased about Christian’s (Jude and Ozzy McGuigen) return. Victor and Nikki will agree that this is a terrible situation. Meanwhile, Nick (Joshua Morrow) will tell Christian that it’s just them now. He’ll note that only Chelsea and Connor are going on the secret trip.

Across town, Phyllis (Gina Tognoni) will give Hilary (Mishael Morgan) a pep talk. Hilary won’t think there’s any hope of earning Devon’s (Bryton James) forgiveness, but Phyllis will push for patience. She’ll add that Devon’s romance with Simone (Shanica Knowles) will be a thing of the past soon.

Hilary will want to concentrate on getting pregnant instead. She’ll vow to revisit her sperm donor search, but some disturbing nightmares will change her mind. Hilary will confide in Mariah (Camryn Grimes) later. She’ll get emotional as she talks about bailing on the plan. Hilary won’t want to make a baby unless she’s in love with the father.

Devon will catch Hilary in a vulnerable moment, but she’ll quickly regain her composure. The Young and the Restless spoilers say they’ll bicker about the show, so Hilary will quit. However, Devon will remind Hilary that she has a contract. He’ll note that she’ll have to pay a hefty fee if she leaves now.

Hilary will wonder why Devon wants to keep her on board. He’ll suggest it’s because she’s the face of all this. Devon will contend that the success of GC Buzz depends on Hilary’s involvement. At the penthouse, she’ll visit Nick to offer sympathy. He’ll expect an “I told you so,” but Phyllis will just wish she could’ve done more to prevent the pain.

Afterward, Victor and Nikki will stop by as well. Y&R fans can expect some tension between Nick and his father, but Victor will just try to support Christian. Back with Phyllis, she’ll stop by Sharon’s (Sharon Case) hospital room. Phyllis will give Sharon updates on runaway Chelsea’s drama, which will naturally stun Sharon.

Nevertheless, Sharon will think Nick deserves to hear the truth about Christian’s paternity. Phyllis will think that’s crazy. She’ll snap that if Sharon spills this, she’ll be just as cruel as Chelsea. Despite Phyllis’ best efforts to stop her, Sharon will indeed blab later this week.

Mommy Dearest! @JessWaltonYR and Jill are back for the anniversary fun! #YR pic.twitter.com/HKvGoY7bif