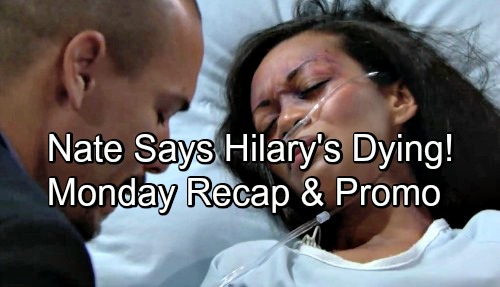 The Young and the Restless (Y&R) spoilers for Monday, July 23, tease that Mariah (Camryn Grimes) will have some advice for Sharon (Sharon Case). She’ll think her mom should patch things up with Nick (Joshua Morrow), who didn’t come home last night. Since Sharon’s (Sharon Case) keeping secrets about J.T. (Thad Luckinbill), it isn’t entirely fair to hold Nick’s secrets against him.

Mariah will also mention spotting Tessa’s (Cait Fairbanks) embrace with another woman. She won’t really want to talk about it, so she’ll change the topic to work. Hilary (Mishael Morgan) won’t be texting as usual, which will leave Mariah a bit puzzled.

Of course, Y&R fans know Hilary’s stuck at the hospital. In the ICU, Hilary will blame herself for being in the car and trying to be pals with Shauna (Camryn Hamm). Devon (Bryton James) will assure Hilary that none of this is her fault. Talk will turn to the show, which must go on. The Young and the Restless spoilers say Hilary will urge Devon to get in touch with Mariah and let her take the lead.

When Mariah gets the devastating call, she’ll break down in tears. However, she’ll try to regain her composure and announce the accident on air. Mariah’s emotional speech will move Hilary and Devon, who’ll be watching from the hospital.

Unfortunately, Nate (Brooks Darnell) will have terrible updates on Hilary’s condition. They can’t control her massive bleeding, so he won’t think she can survive. Nate will privately share the crushing news with Devon. The Young and the Restless spoilers say Hilary’s loved ones will prepare for a difficult goodbye soon.

In the meantime, Nick (Joshua Morrow) and Phyllis (Gina Tognoni) will agree that their hookup was a mistake. After swearing each other to secrecy, Nick will hop in the shower. Suddenly, Kyle (Michael Mealor) will arrive and spot Nick’s pants. Phyllis will lie that they belong to Billy (Jason Thompson) and add that he’s in the shower. Since Kyle just saw Billy, he’ll call her out on her lies.

Phyllis will finally admit she had a one-night stand, but she’ll make Kyle promise to keep his mouth shut. He’ll have a devious expression as he suggests his lips are sealed. Later, Kyle will needle Phyllis as she tries to make amends with Billy. They’ll get back on track, but Phyllis’ suggestion will make waves again. She’ll want Billy to get help for his gambling addiction, but he’ll refuse and delay coming home.

Over with Nick, he’ll return to the cottage and attempt to work things out with Sharon. They’ll take time to truly listen to each other, so the engagement ring will go back on her finger. The Young and the Restless spoilers state that Nick and Sharon will move forward, but their secrets should spell disaster eventually.

It sounds like some gripping scenes are on the way. We’ll keep you posted as other Y&R details emerge. Stay tuned to the CBS soap and don’t forget to check CDL often for the latest Young and the Restless spoilers, updates, and news.