The Young and the Restless Spoilers: Week of July 23-27 – Exploding Secrets, Major Meltdowns and Life-Shattering Shockers 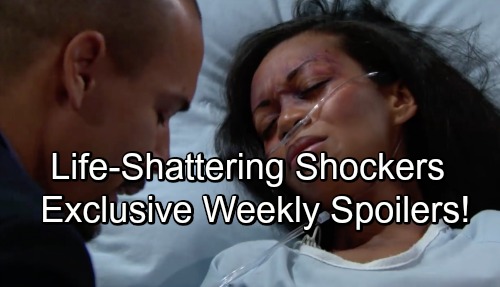 The Young and the Restless (Y&R) spoilers for the week of July 23-27 tease that we’ll see several Genoa City residents in pain. For starters, Devon (Bryton James) will prepare for a difficult farewell. Hilary will develop some complications and unfortunately, Nate (Brooks Darnell) won’t be able to help. It seems Hilary’s condition will be fatal, so Devon and his loved ones will have to accept that.

Later, Devon will have a sweet surprise. He’ll thrill Hilary with a mini wedding in the ICU, so that should give her comfort in her final moments. Hilary will be surrounded by love and that’ll mean something to her. She deserves to have some form of happiness in the midst of this tragedy.

Once Devon and Hilary say their heartfelt vows, they’ll take a minute to reflect on their past. There’s a good chance Y&R will throw in some “Hevon” flashbacks. This couple has been through a lot together, but this is one hurdle they just can’t overcome. By the end of the week, it looks like Hilary will be dead (or in a deep coma) and Devon will be a real mess.

Other Young and the Restless spoilers say Mariah (Camryn Grimes) will struggle with sorrow and anger. She thought she could finally trust Tessa (Cait Fairbanks), so she jumped right into this romance. After spotting Tessa embracing another woman, Mariah won’t be sure about their relationship anymore.

Tessa will notice that Mariah’s putting her guard up, so she’ll naturally be concerned. Mariah will eventually have a bit of a meltdown, so let’s hope that leads to the truth. Tessa may be forced to finally come clean about her past. She’s always kept secrets about a few crucial parts, but she needs to open up and trust that Mariah can handle it.

Over with Kyle (Michael Mealor), he’ll make a gutsy call and score a major Jabot advantage. As Kyle new ally, Ashley (Eileen Davidson) should be pleased by his accomplishment. Nevertheless, these two will have to look out for themselves. Betrayals are common on The Young and the Restless!

Speaking of betrayals, Phyllis (Gina Tognoni) and Nick (Joshua Morrow) will feel ashamed of their own. After a night of passion, these former flames will want to hide from their actions. They’ll plan to keep this a secret, but their hookup will be exposed soon enough.

Later this week, Phyllis and Billy’s relationship will take a serious hit. If Summer (Hunter King) or Kyle (Michael Mealor) finds out about the Nick sex and blabs, Billy’s sure to be furious. “Philly” will have to decide if they can make this work.

As for Nick, he may soften his stance a bit with Sharon (Sharon Case). Nick will likely apologize for going too far and ask if they can try again. His secret will be left hanging over his head, but Sharon’s still got one as well. The Young and the Restless fans can’t forget that Sharon’s part of the cover-up crew. They know J.T.’s (Thad Luckinbill) dead and buried, so lies are spiraling out of control in Genoa City!

It sounds like a fantastic week of drama’s coming up. We’ll give you updates as other Y&R news emerges. Stay tuned to the CBS soap and don’t forget to check CDL often for the latest Young and the Restless spoilers, updates, and news.