The Young and the Restless Spoilers: Hilary Says ‘I Do’ and Slips Away – Death Plunges Devon Into Soul-Crushing Darkness 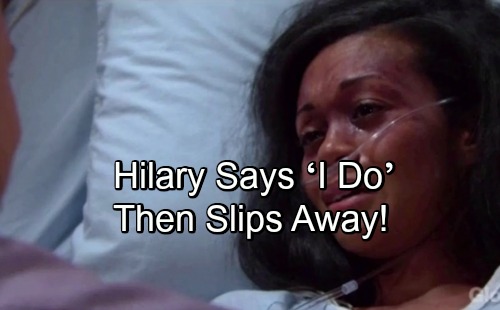 The Young and the Restless (Y&R) spoilers tease that Hilary (Mishael Morgan) and Devon (Bryton James) will exchange vows again. Since it looks like the end is near for Hilary, Devon will want to give her this parting gift. He’ll refuse to let Hilary die as anyone other than Mrs. Devon Hamilton.

Devon has always loved Hilary, even when they were facing obstacles. Hilary has made her fair share of bad decisions, but she’s still got some good in her. Devon has certainly been focusing on that lately. Once he knows Hilary’s slipping away, Devon will realize just how much he truly loves her. Hilary is his soul mate, so a piece of Devon’s sure to be missing after this.

The Young and the Restless spoilers say Hilary will remarry Devon in the ICU. It’s not their dream wedding venue, but it’s better than nothing. Devon will want to soak up every last second he can with his love. Unfortunately, their remaining time together will be far too brief.

Y&R buzz hints that right after they say “I do,” Hilary will breathe her last breath. It sounds like they’ll just barely squeeze in their nuptials. Once Hilary has passed on, Devon will inevitably sit there in shock. He’ll feel paralyzed as he tries to process a Hilary-less future.

Hilary and Devon split up several times over the years, but they always found their way back to each other. Devon never dreamed her death would keep them apart forever – at least not so soon. He undoubtedly imagined growing old together and watching the grandkids play outside. When Devon realizes that’s never going to happen, he’ll break down like never before.

It’s going to take a while for Devon to work through this nightmare. He’ll regret not being in town when the accident went down. Devon will feel like maybe he could’ve prevented it somehow. He’ll also deal with anger over the truck that slammed into Hilary. It’s really Lily’s (Christel Khalil) fault since she ran the red light, so that revelation should shake things up eventually.