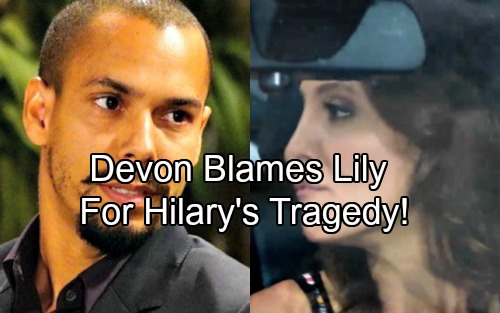 The Young and the Restless (Y&R) spoilers tease that Hilary’s (Mishael Morgan) exit will bring some difficult moments. However, the real drama should come during the aftermath! Devon (Bryton James) will focus on Hilary until the tragic end. It looks like Hilary may die, so Devon has some rough days ahead of him.

Losing both his child and his true love should be devastating. Devon’s going to want some answers about this horrible accident. He’ll know Hilary’s side of the story at that point. She’ll take the blame for everything, but Devon may not buy it. Once Hilary’s gone, Devon may set out to get the whole truth.

Lily (Christel Khalil) doesn’t realize she blew through a red light and caused the crash. The Young and the Restless spoilers say that realization should come later. Still, Lily at least knows she should’ve been paying more attention. She was barely looking at the road during her fight with Hilary. Lily shouldn’t have been driving if she couldn’t concentrate.

Charlie (Noah Alexander Gerry) knows what happened, so he shares the news with Cane (Daniel Goddard) in Thursday’s Y&R episode. After all the hospital chaos winds down, Lily may sense that they’re keeping something from her. She’ll probably put it all together and realize she’s responsible for the crash.

Devon’s sure to be in a terrible state of mind, so he may unleash his wrath. He’ll undoubtedly feel like Lily destroyed his dreams. Devon may seek revenge by putting an end to Lily’s modeling agency. He might insist that she’ll have no further ties to Hamilton-Winters. Devon may find other ways to make Lily suffer as well. She deserves it after the horrible things she said just before the accident.

Lily shouted that Hilary had no business being a mother and now she won’t be. It’s Lily’s fault for being so careless on the highway. Since Cane will inevitably defend Lily, he may get Devon’s full fury as well. It’s going to take some time for Devon to worth through all this. Sometimes anger can be easier to deal with than despair.