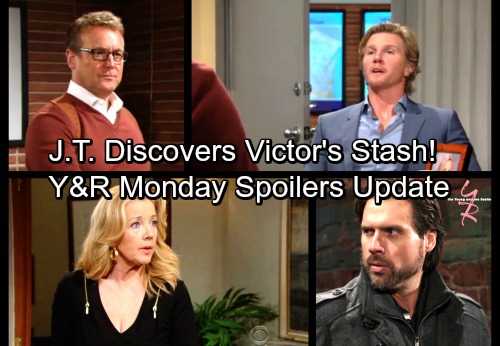 The Young and the Restless (Y&R) spoilers for Monday, March 19, tease that J.T. (Thad Luckinbell) and Paul (Doug Davidson) will bicker over the slow investigation. Paul will feel like maybe there’s nothing to find. He’ll want to drop the case, but J.T. will insist that he just needs a bit more time.

Paul will agree to let J.T. continue, but he’ll push him to move this along. If they’re going to take down Victor (Eric Braeden), it needs to happen soon. Meanwhile, Victoria (Amelia Heinle) will call J.T. and leave an apologetic message. When J.T. returns home, they’ll manage to patch things up.

Talk will turn to the situation at Newman Enterprises. Victoria will explain that she can either leave the company or accept a demotion. The Young and the Restless spoilers say J.T. won’t think she should quit. Victoria will be a little surprised by that, but they’ll quickly move on.

Since there’s tension between Victoria and Victor, J.T. will suggest that he can swing by the ranch to get Reed (Tristan Lake Leabu). He’ll find his son playing chess with Grandpa, so he’ll urge them to continue. J.T. will sneak off to Victor’s home office to do some digging. He’ll take a pic of the safe he finds before Victor walks in. J.T. will make an excuse, but Victor will certainly seem suspicious.

Back at home, Victoria will reveal her big decision. J.T. will approve when she announces that she’s staying on as a Newman employee. He’ll even think they should schedule more family time at the ranch. J.T. will hint that it’s the best way to gain the upper hand with Victor.

Afterward, J.T. will get in touch with Paul again. He’ll explain that he found a safe and it can be cracked. Meanwhile, Victoria will set up a meal at Victor’s place tomorrow night. Everything’s going according to plan, but J.T.’s sure to run into trouble soon.

Other Young and the Restless spoilers say some invitations will arrive. The Walnut Grove reunion is coming up, so J.T. will get an invite. He’ll opt to leave the past in the past, but Billy (Jason Thompson) and Lily (Christel Khalil) will seem interested in the celebration. They’ll wonder who might make an appearance.

At Crimson Lights, Nick (Joshua Morrow) will mention that he’s dealing with Nikki (Melody Thomas Scott) drama. Phyllis (Gina Tognoni) will assume this is about Nikki’s fling with a younger man. She’ll confess that she saw them together and Nick will worry about the consequences. He’ll feel like Victor (Eric Braeden) will blow his top if he finds out.

Nick will confront Nikki later, but she’ll push for his silence. After Nikki explains her arrangement with Victor, Y&R spoilers state that Nick will express concern. He’ll think this secret will come out and Nikki will land in hot water.

It sounds like Monday’s episode will bring plenty of excitement. We’ll give you updates as other Y&R news comes in. Stick with the CBS soap and don’t forget to check CDL often for the latest Young and the Restless spoilers, updates and news.