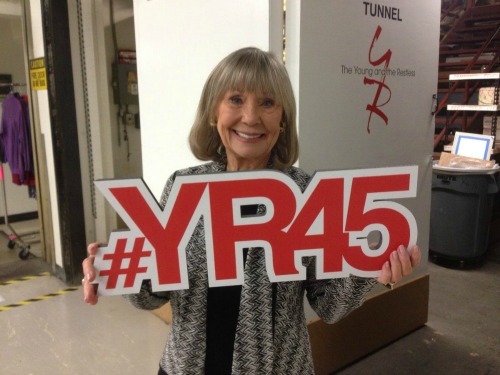 The Young and the Restless (Y&R) spoilers tease that the CBS soap is about to celebrate a huge milestone. If you haven’t heard already, Y&R’s 45th anniversary is coming up. The show’s Twitter account has been posting great pics of cast members with signs that say “#YR45.” They’re encouraging fans to use the hashtag as they gear up for all the festivities.

Some special episodes will air during the week of March 26-30, which means the action’s about to heat up. We’ve got a preview of all the hot drama, so let’s take a look at the details. For starters, Jill (Jess Walton) will return on a mission. She’ll take charge of some tricky situations, but she’ll undoubtedly ruffle a few feathers in the process.

There’s a good chance Billy (Jason Thompson) and Cane (Daniel Goddard) will get unsolicited advice. In other words, Jill will be doing what she does best: butting in everybody else’s business! Meanwhile, Jack (Peter Bergman) will rocked to the core. Dina’s (Marla Adams) Alzheimer’s symptoms are getting worse, so her decline could lead to a health shocker.

Of course, Michael Mealor will also debut as Kyle during the week of March 26-30. The Young and the Restless spoilers say he’ll be working at Jabot, so that could lead to some conflict with his father. You can bet that Kyle will be older, bolder and wiser! Jack may have a hard time keeping his son in line soon enough.

Other Y&R spoilers state that Raul Guittierez (David Scott Lago) and Brittany Hodges (Lauren Woodland) will also make comebacks. They’ll show up in Genoa City for a big party. It looks like this may be a high school reunion, so they’ll join the old gang and catch up.

Mac (Kelly Kruger) is also connected to the beloved Glo by Jabot crew, but she may not be in a very celebratory mood. The Young and the Restless spoilers hint that Mac will face off with J.T. (Thad Luckinbell) and offer Victoria (Amelia Heinle) a warning. J.T.’s abuse should come into play here.

Meg Bennett will return as Julia Newman, so Victor’s ex could shake things up. Nikki’s (Melody Thomas Scott) been getting busy with Arturo (Jason Canela), so maybe Victor could be tempted to have some fun himself. Regardless, Julia will be part of some fun scenes.

Jaime Lyn Bauer will pop in as Lorie Brooks along with Janice Lynde as Leslie Brooks. You can catch them starting March 27. The Brooks clan was a core family back in the ‘80s, so this should be a real blast from the past. It’s fitting since Y&R’s been on the air for a whopping 45 years!

Are you looking forward to the anniversary celebration? Which returns and plots are you most excited to see? We’ll give you updates as other news comes in. Stick with the CBS soap and don’t forget to check CDL often for the latest Young and the Restless spoilers, updates and news.