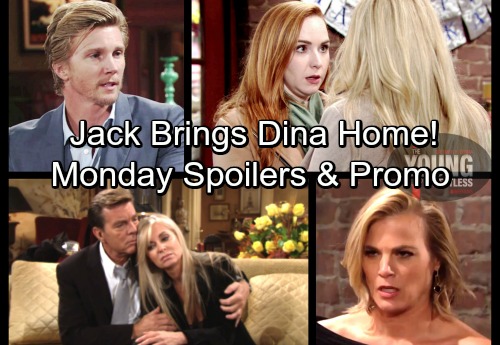 The Young and the Restless (Y&R) spoilers for Monday, March 5, tease that Mariah (Camryn Grimes) will grow concerned about Nick’s (Joshua Morrow) big move. He took Sharon (Sharon Case) up on the offer to live at the cottage, so Mariah’s fears are understandable. Sharon and Nick’s history together will definitely make this more complicated.

Mariah will worry about Sharon getting too attached to Christian (Jude and Ozzy McGuigen) and setting herself up for trouble. She’ll fear that Faith (Alyvia Alyn Lind) will have certain expectations as well. Sharon will insist that everything’s going to be fine. She’ll sit down for a movie with Nick and the kids while Mariah goes out for pie.

At the coffeehouse, Phyllis (Gina Tognoni) will bump into Mariah. She’ll get updates on Nick’s new living arrangements. The Young and the Restless spoilers say Phyllis will immediately head over to Sharon’s place. She’ll speak with Nick privately, but he won’t be convinced that this is a mistake.

At Newman Enterprises, Victoria (Amelia Heinle) will get agitated during a conversation with Victor (Eric Braeden). She’ll claim the info in Jack’s (Peter Bergman) latest interview must’ve come from Ashley (Eileen Davidson). Victor will put J.T. (Thad Luckinbell) on the case. Since J.T. won’t be able to hack Jabot’s server, he’ll sneak in Jack’s office to look for evidence.

Y&R spoilers say J.T. will snoop around, locate the incriminating file and rush back to Victoria. Meanwhile, Victoria will hear from Phyllis and agree to try her luck with Nick. She obviously won’t make any progress. When she gets back home, Victoria will be thrilled with J.T.’s great work. She’ll take the file to Victor and argue that this is proof against Ashley. Victoria will want Ashley out of Newman ASAP.

Other Young and the Restless spoilers say Jack and Ashley will fret over Dina (Marla Adams). Abby (Melissa Ordway) will mention the possibility that Dina hopped on another train. The thought of Dina being anywhere in Europe will leave Jack in a panic.

Ashley will comfort Jack, but she’ll be nervous, too. Thankfully, social services will let Dina call back via video chat. She’ll be all the way in London, but she’ll be OK. A relieved Jack will vow to retrieve Dina right away. It’s time for Dina to settle down with the fam in Genoa City.