BY Heather Hughes on September 27, 2018 | Comments: one comment
Related : Soap Opera, Spoiler, Television, The Young and the Restless 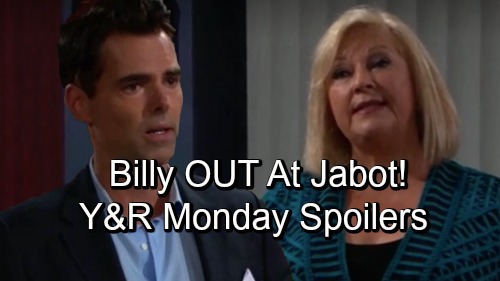 The Young and the Restless (Y&R) spoilers for Monday, October 1, tease that we’ll see a schedule adjustment. Due to a national preemption, the episode previously planned for Friday will air on Monday instead. Keep that in mind as you plan your soap viewing!

First, Phyllis (Gina Tognoni) will hope to clean up Billy’s (Jason Thompson) mess. Unfortunately, he just won’t see any way out. Billy won’t think they can replace the money he stole before the truth comes out. He’ll reject Phyllis’ offer to pitch in, but she won’t give up.

Phyllis will eventually tell Jack (Peter Bergman) that he can help Billy out, but it’ll take $250,000 to make it happen. It seems she’ll think Billy can swing the rest. Meanwhile, Kyle (Michael Mealor) and Ashley (Eileen Davidson) will spar over the embezzlement drama. He’ll keep pushing Ashley to protect Jabot, but she’ll think Kyle’s being rather cold toward Billy.

Nevertheless, Ashley will admit that she’s got a plan. She’ll want to get Traci (Beth Maitland) on board with the CEO takeover idea. To start, Y&R spoilers say Ashley will call a meeting and set up a vote. They have to knock Billy off the throne to get the ball rolling.

After Jack agrees to hand over the cash, Phyllis will give him a warm hug. Billy will walk in on it, so they’ll reveal how Jack’s going to help. It’ll take some convincing, but Billy will accept Jack’s assistance. He’ll be grateful for his brother as well as Phyllis.

However, Jack will point out that he needs something in exchange for the money. If he’s going to bail Billy out, he’ll need the promise of a rehab stint. After Billy makes the deal, he’ll embrace Phyllis in an emotional moment.

In the prison visiting area, Traci will have a chat with Lily (Christel Khalil). The Young and the Restless spoilers say Lily will open up about her struggles. She’ll confess that the guilt of what she’s done is the worst part. Traci will provide a pep talk before the twins pop in. Charlie (Noah Alexander Gerry) and Mattie (Lexie Ainsworth) will continue to support Lily through her tough ordeal.

Traci will meet up with Ashley soon after. She won’t be keen on humiliating Billy with a takeover, but Ashley will insist that it’s happening. Ashley will feel like things will be far worse if Traci doesn’t step up. Back with Billy, he’ll get on his computer and find that he can no longer access the accounts. Gloria (Judith Chapman) will head in Billy’s office and reveal that a board meeting’s about to take place.

Once the meeting gets underway, Phyllis will try to undo the damage. She’ll insist that Billy’s headed to rehab, so everything’s going to be fine. Ashley will pipe up that her brother stole $500,000 from the company. Jack will hope that’s a lie, but Kyle will have the proof to back it up.

Since Billy won’t be able to deny the accusations, Ashley will move forward with her plan. The Young and the Restless spoilers say she’ll call for a vote of no-confidence. Ashley will believe this is the only way to start steering Jabot in the right direction.

Finally, Nikki (Melody Thomas Scott) and Abby (Melissa Ordway) will use some teamwork. Despite the fact that he wasn’t invited, they’ll convince Victor (Eric Braeden) to attend Nick (Joshua Morrow) and Sharon’s (Sharon Case) wedding. Abby and Nikki will feel like this will help bridge the gap.

It sounds like some fantastic scenes are coming up. We’ll give you updates as other Y&R news emerges. Stay tuned to the CBS soap and don’t forget to check CDL often for the latest Young and the Restless spoilers, updates and news.