The Young and the Restless Spoilers: Monday, October 29 – Ashley Jets Off to Start a New Company – Sharon Puts Walls Up with Rey 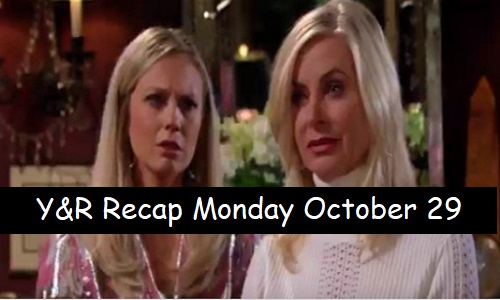 The Young and the Restless (Y&R) spoilers for Monday, October 29, tease that Ashley (Eileen Davidson) and Jack (Peter Bergman) will face off again. She’ll insist on starting her own company with the patents and products she’s taking. Ashley will argue that her family always sides with Jack because he’s the one who really matters to them. There’ll be plenty of tension in the Abbott family living room!

Jack will argue that he can’t help how things played out when he was a teen. Unfortunately, that bossiness carried over into adulthood and Ashley’s just done. She’ll reveal that she’s headed to Paris, but the rest of the Abbotts will protest. When Dina’s (Marla Adams) name is brought up, Ash will suggest that her mother would be on board with her decision. She’s finally taking charge of her own life.

Traci (Beth Maitland) will do her best to talk her sister out of this. However, Ashley will insist on saying her goodbyes. She’ll share a tender moment with Dina before Jack moves forward to talk. Of course, Ashley won’t think there’s anything left to say. She’ll end up leaving the house, so Jack will go after her. The Young and the Restless spoilers state that he’ll want to apologize and make this right.

Over the phone, Ashley will fill Neil (Kristoff St. John) in on her departure plans. She’ll hint that maybe he can jet over and visit her sometime. Afterward, Jack will appear and express regret over the blood-Abbott clause. He’ll beg Ashley to reconsider taking the patents and leaving all Jabot’s employees at risk.

Jack will confess that part of him always feared Ashley would outshine him. He’ll think maybe that’s why he stooped so low with the clause. Ashley will get choked up and thank Jack for saying what she needed to hear. Unfortunately, it’s not enough. Ashley will contend that she has to put herself first, so she’s catching her flight as planned.

Y&R fans will see Ashley sip some Champagne as she jets off on her new adventure. Meanwhile, a glum Jack will head home. He’ll gaze at the empty chairs in the dining room as he battles regrets. At Crimson Lights, Rey (Jordi Vilasuso) will offer to carpool with Sharon (Sharon Case). She’ll be uncomfortable with the suggestion.

After another incident or two, Rey will call Sharon out on the awkwardness. She’ll just want to be careful about how their friendship might look to other people. Rey will think Sharon means Nick (Joshua Morrow) specifically. It seems she’s still trying to navigate the trickiness of her breakup.

Sharon will also offer advice to Devon (Bryton James). He’ll be upset about Lily’s (Christel Khalil) transfer, but Sharon will think he’s got this. She’ll believe Devon can bring the family together and get through the crisis. Over with Cane (Daniel Goddard), he’ll express the same thing to the twins. Mattie (Lexie Stevenson) and Charlie (Noah Alexander Gerry) will be distraught, but Cane will have a game plan.

The Ashbys will visit Lily as often as they can and write letters as well. Devon will even offer his private jet to Cane anytime he wants it. He’ll assure Cane that his marriage can withstand the difficult separation.