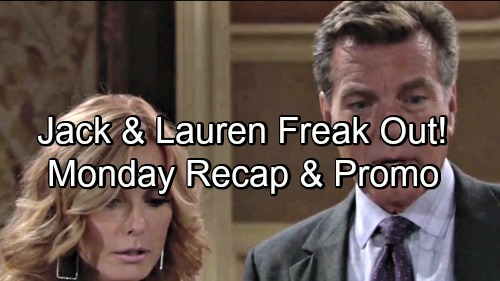 Meanwhile, Billy (Jason Thompson) will reassure Phyllis (Gina Tognoni) in Las Vegas. Despite her desire to head home, Billy will want to stick around and be spontaneous. After a sex session, Billy will promise that his gambling’s under control. Phyllis will eventually shift gears and mention work. She’ll insist that she needs to get back to Fenmore’s, but Billy will distract her with more sex.

Afterward, Billy will share how happy is to let loose. He’ll feel like he’s finally able to be himself. The Young and the Restless spoilers say Billy’s phone will ding with a message. Another tournament spot’s open and waiting. They want him to return next weekend, so Billy will be thrilled. Phyllis, on the other hand, will seem apprehensive. She clearly knows Billy’s heading down a dark road here.

Back in Genoa City, Tessa (Cait Fairbanks) will seek an advance on her pay at Crimson Lights. Sharon (Sharon Case) will think it’s a little soon for that. Tessa’s only been a barista for a week! After Tessa serves Charlie (Noah Alexander Gerry), he’ll admit he’s skipping school and ask her to keep it a secret.

Next, it’ll be Sharon’s turn to seek a favor. After Rey (Jordi Vilasuso) appears and starts grilling Tessa, Sharon will be uneasy. She’ll corner her employee once Rey leaves and demand to know everything that was said. Tessa will admit that Rey asked about Victoria (Amelia Heinle) and Phyllis (Gina Tognoni). Nick’s (Joshua Morrow) name also came up.

Once Tessa’s done spilling the details, Sharon will decide to offer that advance after all. She’ll ask for Tessa’s discretion in return. Y&R spoilers say Mariah (Camryn Grimes) will walk in and get updates on Sharon’s move. She’ll be taken aback and ponder where the rest of the cash will come from.

Mariah will bring up Tessa’s decision to ask Devon (Bryton James) for the 20 grand. Tessa will assume it created doubts about her story, but Mariah will promise she’s still on her side. However, Mariah will battle worries after coming clean to Sharon. She’ll blab about why Tessa supposedly needs that much cash and wonder if this is about love or money.

Other Young and the Restless spoilers say Charlie will open up to Devon (Bryton James). He’ll admit he blames himself for Lily’s (Christel Khalil) sentence. Devon will argue that they can’t focus on all the what ifs. He’ll embrace Charlie, who will push Devon to visit Lily in prison. Charlie will offer a deal when Devon refuses. He’ll promise to go back to school if Devon makes the effort, too.

Back with Rey, he’ll chat with Nikki and Victor briefly. Once they’re alone, Victor will confess that he finds Rey more trustworthy than Arturo (Jason Canela). Nikki will suggest that she has her own concerns. Rey is definitely raising some suspicions around town! On Monday, he’ll give someone a call and announce that it’s going down tomorrow night.

At the Abbott mansion, Lauren (Tracey E. Bregman) will check out the picture Jack shows her. She’ll realize her father, Neil Fenmore, is standing near Dina (Marla Adams). Since they’ve slept together before, they’ll freak over the possibility of being half-siblings. Fortunately, comparing blood types will shut down their fears.

Lauren will identify one more guy in the pic as Stuart Brooks. She won’t recognize another mystery man. The Young and the Restless spoilers say Jack will revolve to find out who he is, but he’d better be careful what he wishes for! We’ll keep you posted as other Y&R news comes in. Stick with the CBS soap and don’t forget to check CDL often for the latest Young and the Restless spoilers, updates and news.