BY Heather Hughes on September 7, 2018 | Comments: one comment
Related : Soap Opera, Spoiler, Television, The Young and the Restless 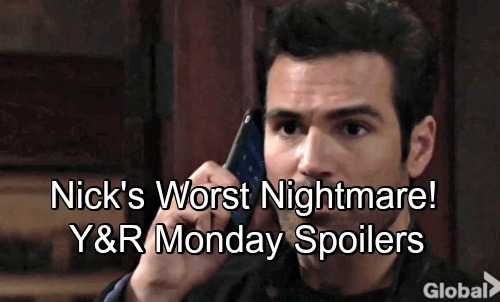 The Young and the Restless (Y&R) spoilers for Monday, September 10, tease that some surprises are in store. First, Billy (Jason Thompson) will move forward with a dangerous plan. On Friday’s new Y&R episode, Sept. 7, Billy lands in Las Vegas with Phyllis (Gina Tognoni) and kicks off his part in the poker tournament. Things start out on a positive note when Billy wins big, but he seems poised for a devastating loss next week.

In Monday’s Y&R episode, Phyllis will remain concerned about the cash Billy’s ponying up. She won’t want to see him blow all his money, but that won’t stop Billy from betting even more. Doubled stakes will make for an exciting round, but Billy could end up losing all his winnings and dipping into his savings. There’s just too much room for error here.

Sinead (Lira Kellerman) will certainly be egging Billy on every step of the way. Will Phyllis figure out she’s working with Kyle (Michael Mealor)? Probably not just yet, but that revelation could sooner or later. In the meantime, Nick (Joshua Morrow) will make the final preparations for the launch of Dark Horse. He’ll be excited about showing off his new company and getting the word out.

Despite Nick’s reassurance, Sharon (Sharon Case) may continue to see some warning signs. She doesn’t want Nick to turn into Victor (Eric Braeden) 2.0, but she’ll do her best to support his venture. The Young and the Restless spoilers say Mariah (Camryn Grimes) will feature the launch on GC Buzz. Nick will beam with pride, but that’s only because he doesn’t know what’s looming.

It turns out Mariah will get the story of a lifetime when Nick’s arrested at the party. Hilary (Mishael Morgan) would be so proud. The old Hilary anyway! Thanks to Rey’s (Jordi Vilasuso) investigative skills, Nick will go down for impersonating J.T. (Thad Luckinbill). He’ll face some serious legal drama, but help’s coming. Brittany (Lauren Woodland) will return to fix another Newman mess later this week, September 10-14.

Sharon will worry that her own secret’s going to be uncovered. How long can the cover-up crew keep their nightmare under wraps? We’ll give you updates as other Young and the Restless news comes in. Stay tuned to Y&R and don’t forget to check CDL often for the latest Young and the Restless spoilers, updates, and news.