BY Heather Hughes on August 30, 2018 | Comments: one comment
Related : Soap Opera, Spoiler, Television, The Young and the Restless 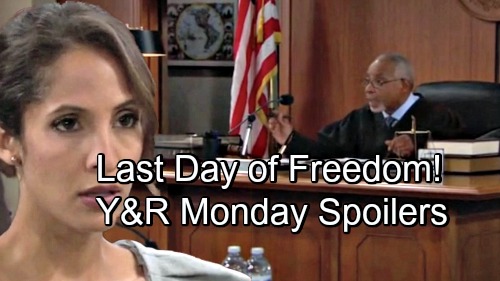 The Young and the Restless (Y&R) spoilers for Monday, September 3, tease that it’ll be court day for Lily (Christel Khalil). After finishing off a wonderful night with Cane (Daniel Goddard), Lily will awaken filled with dread. She’ll be terrified of the outcome she might face, but she’ll choose to bottle up her fears and put on a smile for her family.

Lily will suggest that they should all sit down to breakfast together. She’ll secretly be thinking it could be the last time she’s able to do that. Cane, Mattie (Lexie Stevenson) and Charlie (Noah Alexander Gerry) will all show their support, but Lily will continue to struggle. She can’t control what Devon (Bryton James) might say in that courtroom.

Elsewhere, Devon will get some last-minute advice. He’ll go for a run with Nate (Brooks Darnell), who’ll insist that Hilary (Mishael Morgan) wouldn’t want all this conflict. It can’t turn back the clock or undo the devastating damage. Devon’s vengeful desires will be too much for him to put aside. He’ll plan on making sure everyone knows about Lily’s feud with Hilary.

Devon will reiterate that Lily took his wife and child from him. He’ll refuse to back down, but Nate will warn that he’ll have to live with the consequences. Devon will decide that no matter what emotions come later, taking Lily down will be worth it. He’ll be prepared to lay it all out there and make Lily seem like a villain.

The Young and the Restless spoilers say Michael (Christian LeBlanc) and Christine (Laralee Bell) will get to the courtroom early. They’ll speak briefly about what this will do to Devon, Lily and the people they’re connected to. Christine and Michael will realize this could really make or break the family’s future.

Other Y&R spoilers state that Abby (Melissa Reeves) will demand answers. Early on next week’s new Y&R episodes, September 3-7, she’ll corner Rey (Jordi Vilasuso) and wonder what the Rosales brothers are hiding. Abby will try to figure out the source of the tension between Arturo (Jason Canela) and Rey, but she’ll have her work cut out for her. It could be a while before the whole story comes out.